Recently installed the JM rail and swapped out defective controller with dead power supply, (1F support was extremely helpful in the exchange)

Upon rebuilding table and setting machine and upgrading to 1.1.1 from 1.0.9, I have experienced a lot of issues.

In no particular order:

“over” and “under” with no code loaded after homing.
Occasional lockup while homing, (Z would home, then Y would freeze)

Probing issues after enough reboots to get a successful homing, soft limits error. I assume this was because the units default to metric and I didn’t notice.

After one reboot I homed machine successfully, but when I went to move with the game controller, the y motors tried to move in opposite directions, one positive and one negative, putting a lot of twist on the rails before I could hit the stop.

There were a few more issues, but I’ll spare you. The attached, however, showed up after Y motors " twisted" and no I was not jogging while homing.

Anyone ever see the motors oppose each other?

Why does a reboot result in metric unit selection, ( I don’t recall this when upgrading to 1.0.9, but I see it there now after downgrading from 1.1.1) And in 1.1.1 when units are changed on control fly-out, is that just for display or is it equal to the old settings fky-out toggle of units?

Is 1.1.1 generally solid for most of you that have upgraded? 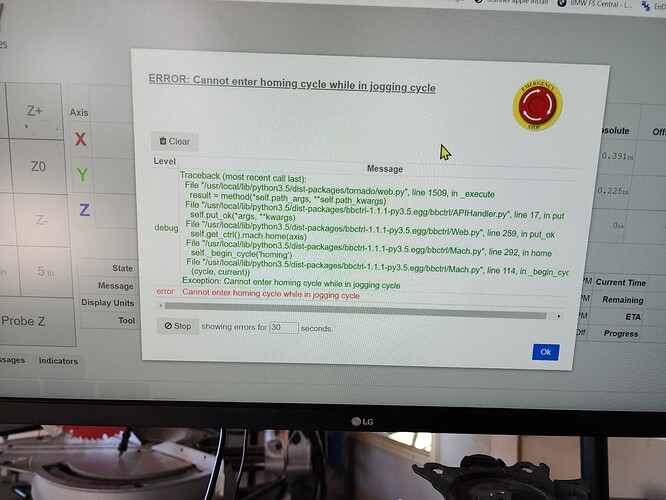 The machine on its own decided to suddenly zero correctly (no input from me) and the joystick then worked great.
Although connectivity seems to have improved!

Strange. An additional issue I had was during a slow cut, x positive, and the machine suddenly did a jerk and reset to zero on all axis and kept moving after.