I got about 8 weeks to wait on my Journeyman.

I’d like to get a 3d printer. Basically for two things 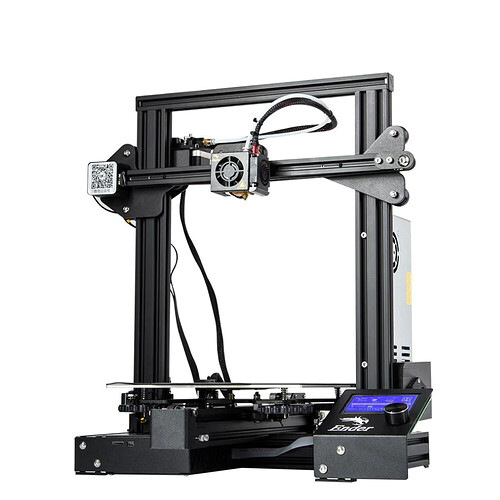 Buy the official Creality3D Ender-3 3D Printer for a discounted price of $209.99 and enjoy a 1-year warranty and 14-day return.

But I’m open to other suggestions. Any thoughts?

The other thing I was considering was doing this upgrade on the Ender 3, but I don’t really know if this makes any sense at all.

I’ve been using a Prusa Mk3s+ for a few months now, making drag chain mounts, dust collector connectors and various other things as I need them.

I went with the Prusa kit instead of the already built unit, took me a day or so to put it together gradually. Easy to build, and the machine works well with no mods.

The difference I’ve seen between Prusa and Enders is that most folks eventually start to mod the Ender to increase performance, make it easier to maintain, etc. Prusa basically just works, but you definitely pay more. I wanted something that could put out parts with minimal input from me. I’ve got too many other projects going all the time to really want to get into designing and modifying 3d printers.

Many folks out there very happy with the Ender products though!

@paulmcevoy75 i believe this decision should be based off of your personality. What I mean is do you like to tinker? If so go with the ender. If you are hoping to hit the ground running then go with the Prusa. Me running a Business I have 14 Prusas and one artillery sidewinder. I believe there is less tinkering with the Prusas however when I had my ender it was a tank. It was slower than the Prusas but what a great first 3D printer.

All of the Ender printers are good value buys. I have a 5Pro, and it works really well. Like @RowdyRoman said though - I did a good bit of tinkering with it. Not that I really had to, but there’s so much out there that’s interesting to do I couldn’t resist.

I have a router bit that cost more than my 3d printer did - the 3d printers are pretty reasonable for what you can do with them.

If cost isn’t a prohibitive factor and the desire to make parts has more priority than understanding how the machine works, get the Prusa. I have a Prusa i3MK3 and an Ender 3V2.

I bought the Ender to supplement my hobby and decided on the Ender because I wanted to find out what you get for $300 vs $1000 for a Prusa.

I have over 5,000 hrs on the Prusa and have changed 1 proximity probe and one thermistor.

Within the first 500 hrs on the Ender, I added a micro SD to SD card reader, MicroSwiss hot end, a BL touch bed leveler, third party firmware, did the really common PTFE hotend fix, printed all of the parts necessary to install the accessory parts, printed an upgraded part fan housing, added a metal extruded dual drive gear roller and arm, got different bed leveling springs, and added a nylon PTFE coupling on the hotend to prevent the PTFE tube from being pushed out by retractions. Oh, and switched to Capricorn tube. I think that’s it, but there could be more.

The Ender has helped me learn the mechanical aspects of printing while the Prusa helped me learn Fusion 360. I say this because the Prusa just works, allowing me to spend my time with CAD and slicer software. The Ender drove me to “tune” it to be better and this had me learning the printer itself.

Prusa’s Mini is in the price range of most Enders. I don’t have experience with a mini so I can’t speak to its operation, but I know it’s build volume is smaller that most printers.

In all, both printers make great parts. It really comes down to what you want or expect your printer to do.

Thanks Guys. I ordered the Ender 3 pro just now and I’ll see how it goes. $1k is not doable at the moment and the Prusa Mini seems to get pretty mixed reviews on the Prusa site. Looking forward to it.

$1K is for an assembled PRUSA I believe. The kit is about $750. Still more than the Ender I know but maybe a little easier to justify. I built my MK3S+ in about 5 hours and when I fired it up it worked perfectly. The manual is very well written with loads of photos and illustrations.

I agree with RowdyRoman and GregT. If you have enough time and will to play around with modifications and upgrades, Ender will work for you. Wanna print and spend your time with other things then this, Prusa is my choice. I have MK3S+ and Mini+ and both work really fine. Easy and reliable. One in the office, one at home. I have also switched to Prusament, works really well for me too.

I have to say I’m very impressed with the Ender Pro 3. Print quality is very good and it’s been really easy to use. Initially it was pretty wonky but I went through and tightened every bolt (the included allen keys really suck) and tightened the belt. No complaints whatsoever.

As I’ve stated, I’m new to this skillset, so I won’t pretend to be able to compare it with others, but for all you people thinking about getting into 3D printing, I’ll lay out what you’re looking at getting into…

Upon receiving the creality 3d printer, you’ll have to do a bit of assembly. Nothing too complicated, and there are many walkthroughs on YouTube, that can guide you through the entire process. Its not a must, but having some experience with tools and a bit of problem-solving skills will help you out a lot. By the time you’re done, you’ll have a grasp on how your printer works, which is important when it comes to using and maintaining it.

Once you’ve got it set up, the next thing you’ll want to do is look up installing filament and leveling the bed. Again, search for YouTube videos, especially with leveling the bed, because you’ll want to pick up a good strategy on this, as it’s critical to having success with your prints. The best strategy that I’ve found is the one using the sheet of paper. At first, it might feel a bit overwhelming trying to get everything just right, but as you use this skill, and lay down some plastic on the bed, you’ll get a feel for it, and within a couple weeks you’ll be able to do it blindfolded, and you’ll understand why it’s so important, and what areas you need to pay the most attention with each print.
I strongly recommend getting the yellow spring upgrades that you can find on this website. Honestly, the difference is so drastic, and the cost so cheap, I dont understand why it doesn’t come that way.

I’m a happy Ender 3 Pro user, it’s a great entry level machine. Yes, I have done a few mods to improve performance , nothing too difficult though.
PWNCNC has a great collection of files on Thingiverse, his clamping solutions for a threaded insert spoil board are great.

I have a Creality 10S Pro, and love it! You should be happy with the Ender, but I have a suggestion, order a Wham Bam for your printer, you will NEVER regret it! Getting finished pieces off the work bed can suck.

I have an Ender 5 Plus which I like. Can do a square foot in there, though I’ve never tried anything that big.

I have had great service out of an Enderr 3 V2… until I upgraded it.

Note: I bought the EZABL from TH3d and have had a devil of a time getting that thing to work right. I have literally been on tech support for 3 months and have even sent it back once. I have plugged the stupid usb interface in to use PRONTERFACE so many times that I killed the port.

What they don’t tell you is that your printer needs to be nearly perfect for the auto bed leveling to work. This seems to defeat the purpose fo me. The first rainy day I have I am going to completly disassembe the unit and get out the calipers, 123 blocks, etc and square that thing as close as possible. The line the tech guy said is that as long as you are trammed within .5mm you should be good. I have the thing less than .3mm and it still doesn’t work right.

This is my experience. Obviously it works for other people.

I will say this: The people at TH3D are FANTASTIC and very helpful… I just can’t get their product to work.

But more to your point: I wanted the Prusa when I bought the Ender but it wasn’t available. I don’t want to fiddle around with a stupid printer like I have to with the Ender. So if I had to do it over again and the Prusa was available I might invest the extra $400 to just save a whole lot of time.