Posing a question to the entire community here: has anyone been able to successfully achieve rotary axis operation with the stock controller?

I’ve hit youtube pretty hard for the past 6 months, in the run-up to purchasing the WW X-35 and after, and though I’m totally seeing this clever hack being used for other brands / controllers, I’ve yet to see anyone post if they’ve managed to get a rotary axis swapped-in on the X or Y axis with the stock controller.

I know that this is a hot topic and that it’s been a feature request for as long as this glorious machine’s been available but, short of simply asking for a controller upgrade, I’m wondering if anyone’s gone down the road of 3-axis milling with a rotary swapped-in? That seems like the most viable option at this point to take machining with the Onefinity to the next level so, if anyone’s done it and before I drop another chunk of change on more hardware, would you be so kind as to comment your journey?

Also, for those who haven’t considered the option, yes, it’s absolutely plausible for the Onefinity to be just as capable of this as other (obviously lesser) brands. Youtube’s filled to the brim with unworthy Shapenopoes sporting rotaries so, if they can do it, Team Onefinity certainly should be able to do it better.

Roger Treadway @rblur01 showed how he did this with the stock controller, the links are here in this post.

Welcome to the forum!

Brilliant! Thank you. That’s definitely confirmation, then. I’d not even bother toying with the Y axis, though, and just aim to swap and adjust the X axis parameters whenever switching between linear and rotary.

This is promising. I know it’s not true 4-Axis but it effectively facilitates the notion of CNC lathe capabilities and that’s a lot more flexibility in machining at the end of the day.

I’m gonna go for it. Most of Youtube thinks that the attached rotary setup is decent and I can’t argue with the cost. If it’s as simple as connecting the X axis cable to it and adjusting controller stepper parameters to get it under control, that’s that.

Honestly, I don’t know how I missed your post on the subject. I’ve been browsing the forums since December of last year, before I even decided to pull the trigger on the purchase.

The irony is that I almost didn’t opt for the Onefinity because of its controller’s inherent shortcomings but, as we all know, where the controller falls short, the engineering of the machine itself compensates above and beyond.

I really wanted a rotary axis but I settled for what’s literally proven to be “best in class” design. It’s awesome to find out that I actually can have my cake and eat it too.

Yes it’s possible for sure I used it a little bit but I’ve taken a break from using mine for the time being, been busy with work and other things. But there are always work around and ways to get things working with the controller that don’t seem possible at first. I thought about getting a better controller, but this one is perfectly fine for me at least until I start doing more complex things or needing a better controller. I’m sure I could dial in the rotary settings better than what I posted back a while ago but it was working good when I made the post and was testing it. But overall I think the onefinity is an amazing machine for the price. And can be upgraded if you ever need to. I started with an xcarve and upgraded it quite a bit and I’m pretty sure with upgrades and things I paid more than what I paid for my woodworker onefinity. And the onefinity is much better than my upgraded xcarve (which I sold to recoup some of my costs for the onefinity).

I’ve got no complaints about the Onefinity machine. From the moment I saw it showcased in a showdown against the Shapeoko last year, I suspected its design would blow the doors off anything in its class. Anyone who’s ever had the privilege of working with high-carbon steel on old-school vertical mills will immediately recognize the superior rigidity of the Onefinity and how the competition would literally buckle under the pressure by design.

It also helps to note that, no matter which machine you inevitably opt for, the machine itself is only a fraction of the cost of machining. It’s really the tooling that gets you over the long term so might as well spring for the superior machine to run the tools on.

I mean, it’s not a Bridgeport. I can’t hog out 30 thous of A2 at full tilt but respecting doc, speeds and feeds, there’s no material this machine can’t mill. And you can bet it can throw a chunk of pine across the shop when clamps refuse to do their job and it does it without binding. Reminds me of days when I’d forget to turn the magnet on for surface grinding. It’s a wonder I’m still physically intact. Mentally, not sure I ever was because I still love watching machines fling parts across the shop.

Nah, once I get this rotary axis issue sorted, I think I’ll be happy. Sorta. There’s still the matter of exploring CNC plasma cutting so, as always, machinist wet dreams persist.

The thing about that that’s delaying the inevitable is welding up the water tank and table insert to accommodate the plasma operation. It’s a matter of engineering a convertible table that retains its rigidity, squareness and flatness with all the exciting changes the bed must allow if its to acrobat between wood carving, metal milling and plasma cutting. Each bed requires its own unique design for its purpose and at least two of those inserts would be fairly heavy.

I envision some sort of medieval, chain / gear driven torture table that converts to whatever with the pull of a chain… and there goes all the rigidity and flatness tolerances right out the dungeon window! But plasma cutting doesn’t necessarily need the same level of flatness that woodworking / metalworking do, right? So a table could actually just harbor the water tank and slats beneath the business end of higher tolerance beds that sit flush above all of it. Hmmm.

Buy another onefinity, really, and dedicate that one to metalworking? Onefinity would probably endorse that option but my bank account is giving me the finger.

I have a sick feeling that, if we continue to talk about this, we’ll have no choice but to do the things because we’ll inevitably solve all the theoretical issues slowing us down… and my bank account is now giving me both fingers I’m done.

First I must appologize for my complete newb-ness. I’m nore a designer than an engineer or electrician.

I’m about to try adding a rotary acis as you have done but I was thinking to wire the Y axis in series so that I can free up one of the drivers for the A axis. I’ve seen a couple of different ways to wire this an before I attempt it, I thought I would ask if you knew how to wire it properly. I don’t want my Y steppers to turn opposite directions and lock up my machine. hehe There should be enough amperage for the controller to deliver to both motors through one driver, so I think it would be nice not to have to swap the A axis cables every time I want to use it.

Here are two wiring diagrams I’ve seen so far but not sure which is right for the Onefinity wiring. Thoughts? 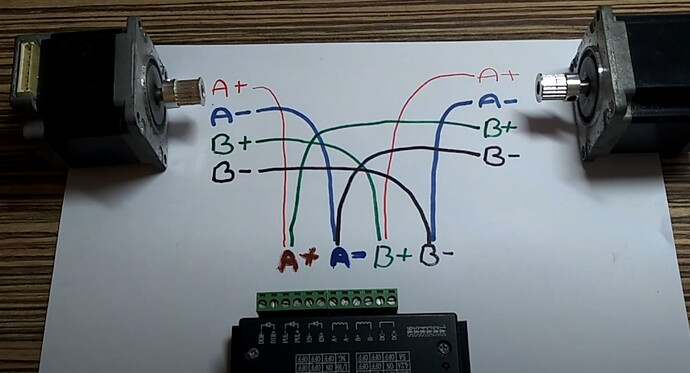 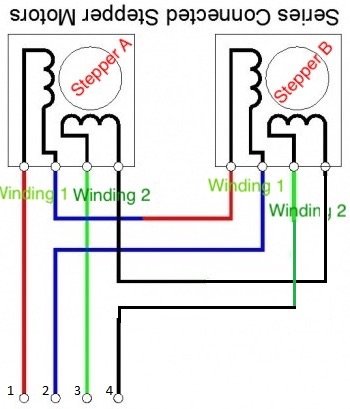 I’ll be honest I have no idea. I would have to look through some documentation and even then I would want to test it out. I always just unhooked my y axis motors to make it easier.

I’m thinking about it now and I don’t think I can do what I want anyways… The controller has 4 ports but only 3 drivers (I think). So I need to unhook the Y in order for the driver to be changed to A anyways. It would be useless of me to series wire the Y motors unless there was a fourth driver. I’ll check and make sure and post results if I wire it successfuly.

Thank you though for your fast reply!

“Inside the box, the Buildbotics CNC controller contains a Raspberry Pi 3 single board computer and four very powerful stepper motor drivers based on TI’s DRV8711 driver chip on a custom built PCB.”

I understand the principles of dedicating an axis to the rotary.

Do I have to write my own machine configuration in Vcarve though?

Has anyone written a post processor he is willing to share, or maybe setup a rotary tool on the 1F that is working and would be willing share the setup process?

Roger has a post processor that he posted here. I hope this helps you.

If anyone wants to carve with the rotary attached here is a post processor for vcarve Onefinity ROTARY (MM).pp (5.0 KB) Here’s a test piece I carved with it: Post up them projects - #421 by rblur01

I did both. More of the laser but tested out the carving a few times also.

My question is the post processor that you reconfigured and made available to us thank you by the way will that work no matter what diameter stock we use? As usual thank you ahead of time