Perhaps not the right branded forum but I thought I’d share this for any who are thinking of buying a vfd and spindle. 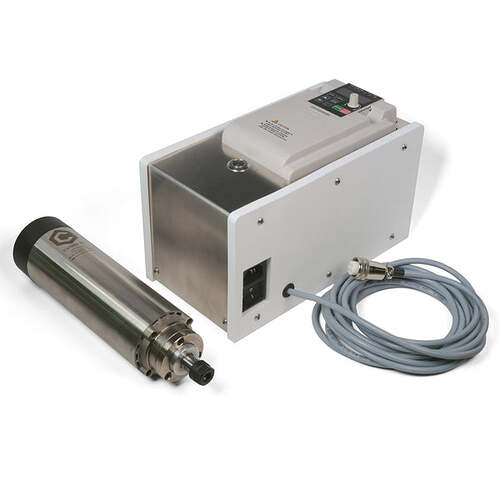 This is our long-awaited VFD Spindle Kit for Shapeoko. If you'd like something more powerful and quieter than a standard trim router, this is the way to go. We've engineered this kit to be as plug-and-play as possible.

I know that’s a lot more spendy than the average DIY spindle from various Chinese suppliers, but there’s something very confidence-inspiring in the fact that it’s basically plug & play from a good reputable company. I see it’s sold out…

6 month warranty isn’t super reassuring? I’m taking a wild guess it’s made at the same factory as all the Chinese imports. The price point doesn’t seem doable for anything else.

It’s nice to see more options from a good brand but it’s a shame for the ER11 collet.

Looking at that kit if you dig a little deeper I noticed a Carbide router that comes with a 150.00 price tag and a 12’ cord. My question is has anyone used one in place of the Mikita? It states that it’s 65mm and with a 12 ‘ cord could be good for drag chains…

PwnCNC is also selling a spindle kit… same as here, it appears to just be the same chinese kits as everywhere else, but at double the price.

I do agree that plug and play capability is reassuring but at the same time im not sure its so reassuring as to be worth twice the price tag.

80mm though.
Makita can sell an 8mm collet (and Katsu a 10mm) on the 65mm router, why can’t spindle manufacturers mount an ER16 or ER20 in 65mm package form?

Most likely it comes down to matching the output power and torque to the size of the bit that one should be using with that spindle, trying to run a 1/2" shank 3" diameter raised panel bit in an 800 watt spindle would likely stall the spindle with any appreciable depth of cut so it doesn’t make sense.

Conversely it seems a bit odd when I’m putting a 1/8" bit in an er 20 collet to drill holes but it works great.

It’s missing the point, some useful accessories require a larger collet.
For example, I mount the 3D taster on the Makita with the Katsu 10mm collet. I would not trust that collet with a bit but it’s handy for probing parts.

One interesting thing to note in that video is that the Shapeoko Pro setup in it puts 2 separate drag chains… one for power and one for controls… that may also fix a lot of folks EMI issues as it separates out the wiring by a decent amount.

It’s nice that Carbide put the VFD in a case that’ll protect it from dust. Maybe that’s why they went with a 1200w spindle, to keep the VFD from getting too hot.

Yes the PwnCNC spindle set is even more expensive than the Carbide Shapeko and knowing that they are all pretty much the same sort of Chinese gear is a little frustrating. But given the fact that Carbide is going to support it (or so it seems), that is a little more confidence inspiring and will take a lot of time from support folks; especially up front. Plus, they’ve taken a lot of the integration work on and that’d be a huge help for us. Once their user base all start sharing their experiences, it’ll be something the community will get behind and make the transition to real CNC machining, (no underpowered, handheld trim routers choking to death on a good solid frame), easier for all of them.

Boy, would I love to see 1F take this path. Settle on a 80mm, 220V, water-cooled model. And originally offer no other options to keep things simple. Because if you’re going to take the jump, it looks like this is really the only way to go. 110V would be many amps, one needs the Z20 strength (and 1/2" collets) so 80mm and if we want to run long jobs, water-cooling is the way to go.

I use exactly that er11 router from carbide create on my X50, no problems

I’d like to see a Onefinity sold spindle but I don’t want it to be limited to just one model. I also don’t think they can do it for the price you want. If you look at the 2 vendors being discussed already, you have a basic air-cooled one from Carbide for $750 and the one you want from PWNCNC for $1000 (although you can find them having a 10% off discount). PWNCNC’s price doesn’t seem out of line when compared to Carbide. They have an air-cooled 1500 watt (so more than the 1200 watt Carbide) for $875 and it would come all ready to use on a Onefinity machine.

If I was you, and had the $1000 to spend, I think the PwnCNC one is a no-brainer. No reason to wait for Onefinity to come out with something. PwnCNC has what you want.

@Atroz
Yes, I’ve already reached out to Daniel at PwnCNC and think that’s where I’m headed indeed. Damn, I wish I had known about BlackFriday deal he had but 10% is something. Of course, you’ve got to add the price of the Z20 upgrade but with the Infinite Possibilities program (where you have to mail back your existing Z bracket) and the sale price, you’re able to buy it for a little over $300.

Now comes the 220V part. I just put in a 220V circuit for a jacuzzi and thinking about trying to wire it so that they share the circuit but on two different breakers being fed from my workshop. I’ll turn off the jacuzzi while I’m carving if I don’t have enough current for both. (I would say I can’t use both at the same time but I have been in the tub during a long cut; until I heard about the Makita literally starting on fire…)

I’d love ‘official support’ but you’re right about not waiting for 1F. Hopefully enough of us will use PwnCNC and we’ll have a community to draw experience from. The reduced noise will be a big bonus.

Will be interested in hearing about your experience. I’d like to do this too but it’s not in the budget right now. Maybe in the coming months.

I went on the vevor web site (highly recommended.). The 65mm 1.5 kw 220v spindle plus the vfd is under $200 delivered the manual is in English and easy to follow.

@Avbates
Have you purchased and are using a Vevor spindle on a 1F machine as we speak??