Lurking for a couple weeks, first post, awesome machine, forum has been helpful so thanks for that!

I have the Jtech pro, and want to use it for combined carving and burning. I’m not new to milling, but very new to burning, and I would like to use the same software for both but I don’t yet have aspire (trying to justify that expense when I already have software that I know very well).

My urgent need is to use my laser for vector type engraving but I have mill-type cam software that I’m very familiar with, and I’m concerned that always changing between lightburn and existing cam software, and trying to make them work together intimately is going to be cumbersome.

Question, for a vector etch, can I simply make a couple fake mill tools in my cam software and use the spindle speed for those tools to select the power that I want the laser to be at?

So basically, everything about the Gcode transfer is the same, (using the same Mcodes and Scodes) except my Scodes are scaled to the desired PWM output and I set the tool in my onefinity controller’s “tool” menu to the PWM Laser?

I know things get much more complicated when performing raster etches with pictures and such, but I’m just curious if the vector etching could really be this simple?

I just used the laser tool setup in VCarvePro, set it to 7 watts, then fill in the toolpath parameters I want and run it. Usually I set the power at 100% and the speed at whatever gives me the burn intensity I want. Example: when making a sign: 100% power with 30 mm per minute at .1 step over. Keeping it at 100% power gives me the fastest possible speed for each level of burn.

Yes, that sounds basically like what I plan to do but my cam software doesnt have a laser tool option. I was just going to use a carve toolpath ( so there are no tool offsets relative to the linework) and set the spindle speed to be 255 and the feed speed to be based upon the need for the depth of burn.

Does the gcode posted from vcarve for the OF look just like milling code?

Ive seen $$ used by lightburn for paremeters but I dont know if that translates to a fundamental change in the posted code.

It will look similar but it will use G4 to turn on the laser and S values to set the laser power for when it need to burn. And G5 to turn the laser off when it needs to turn it off. If you are doing a simple sign that burns at the same power all over it doesn’t have as many S commands bc it will turn the laser on and set the S value at whatever power you want and then just move so many commands until it needs to turn it off and move. But if you are burning a picture or something that needs multiple power settings then there will be a lot more S settings in the gcode. Here’s a couple pics of examples of gcode from vcarve for a laser engraving vs engraving with an endmill. Left is laser right is endmill 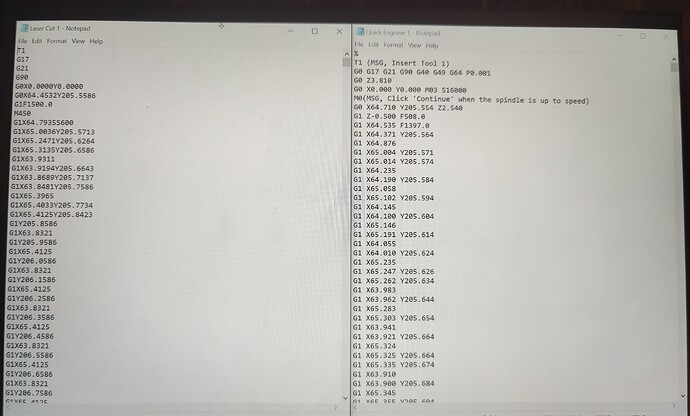 Great, thank you for the sample comparison!

So basically if I set up my “mill tool” to turn counter-clockwise (m4 code) and I stick with tool paths that don’t require a bunch of power changes (to prevent a thousand s-code changes) I can basically control the laser with the mill software.

I’ll give it a try and let you know if it works!

If I’m only doing etching then I’ll only use lightburn, but knowing this is convenient allows me to start carve/burn projects much sooner than buying and learning aspire.

Thanks for the assistance!

Oops yes M not G. And you’re welcome. Let us know how it turns out.

Sorry this response is belated, but I was able to try out running the laser with mill software.

Firstly, I was able to use M3 to turn on the laser, and using 1-255 rpms with the spindle speed worked great.

The only thing that I had to change was that to add m3 and m5 coding for every cut that I wanted to perform. Typically a spindle only turns on once before the first cut and off after the last cut of the program. With the laser you are typically starting and stopping the cut hundreds or thousands of times per program.

So to use the mill gcode without modification, the laser would turn on and stay on until the end of the program.

I fixed this by making my cut depth 0.000" (the height of my focused laser) and my rapid / approach height 0.001". So just before each cut the laser head would lower one thousandth and just after the cut it raised one thousandth of an inch.

To an extra minute, but worked like a charm.

This is an intersting use of the laser, as if a person wanted to use the laser at different “z” heights to move the laser into sharp focus for some cuts, and into a wider less focused beam for shading using a “pocket” toolpath.

Basically if you can measure the width of the beam at different elevations above your work piece, you could set each width as its own “tool” diameter with certain tool length offsets to match the measured beam width.

My cut worked really well as a contour path with no tool offset, but unless you are really doing something custom, lightburn is a good amount faster to process and post.