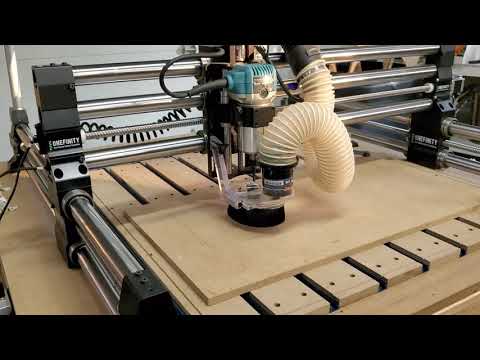 Thank’s to Barry for shooting this video!

No problem, any questions just let me know. Probable make a document with all the steps and changes needed at some point.

Man, dust collection and router controlled with the computer - fancy

Did you put a pause in the gcode to let the router come up to full speed? Might just be post processor thing.

The pause was already in the post processor, I kept it as a sanity/second check. With as fast as this thing moves around, I like having it there.

@CruversWorkshop I’d love to know how you did this - is it triggered with custom GCode, or something else?

It’s a combination of hardware (breakout board, IoT Relay and some wire), software configuration via the UI and a small tweak to the post processor. I use VCarve Pro by Vectric, but this will work on any of the Vectric software. Not sure what this looks like for other software but imagine it can be done as well. Then any toolpaths you save out of your project in VCarve will automatically have this feature in the GCode. I plan on putting a blog post together for the steps needed. Currently standing up a website now. But if you have any additional questions don’t hesitate to ask in the meantime.

What about using a BitRunner from Carbide? It has a connector with these signals:

and this is the G-code:

If I haven’t mentioned it yet, I am a near newbie to CNC, and a complete luddite when it comes to electronics…I can fumble my way through some things, but it’s probably best to treat me like an idiot when talking about this

Seems like there is a possibility it would work, and using the same GCode commands. Though when I searched BitRunner from Carbide Create, it looks like they are discontinuing the product., which would be a concern for me.

The breakout board and IoT relay from Amazon would work out to be cheaper and give you the ability to power items like the router and shop-vac.

Barry, thank you for responding!

Well, I already own the BitRunner, so no cost there. As for being able to run the spindle and the vac at the same time, I plug the BitRunner into my festool vac accessory plug and they both come on when needed. It’s pretty slick. I’m hoping it can be done.

Hopefully that works out for you, it’s a great feature that I can’t live without. I’d checkout the buildbotics forum. That’s where I found enough information to get mine to work. Currently with the way I have mine setup the breakout board sends 3.3v, which triggers the relay. I see in the information you posted that it might need 24v? I do recall a post on how to jumper on the breakout board to get more, or you might need to leverage the L1/L0 ports to get that high. I’m far from an electrical engineer, just know enough to get myself in trouble most times.

Definitely implementing this not only for convenience but also safety. When I hit the e-stop plunger on the controller, I want the router to stop spinning too. Looks like your IOT relay from Amazon would support this by using the normally off plugs.

I’ll get that up in the next few days. Sorry for the delay

That’ll be Great appreciated a lot