Greetings, all. I am having a very frustrating problem. I’ve done several two-sided projects before, with no problem at all. Now, I find that there is a difference between sides of about .030" along the Y-Axis. I’m flipping my project around the X-Axis. I’ve measured my piece very carefully, (with a calipers, yet!). My machine is a OneFinity Machinist. When I command the machine manually, via G-Code, it lines up perfectly on both sides. When I measure the difference in coordinates between two holes (again with the machine) after running my program, there is a .030 difference, with the back hole (cut last) lower on the Y axis. You can get an idea of the problem from the attached photo. The round holes were carved on one side only. The piece is being held rigidly to the spoilboard with a fixture I made. I’m using VCarve Desktop version 11.504. I’m grateful for any advice the community wants to share. 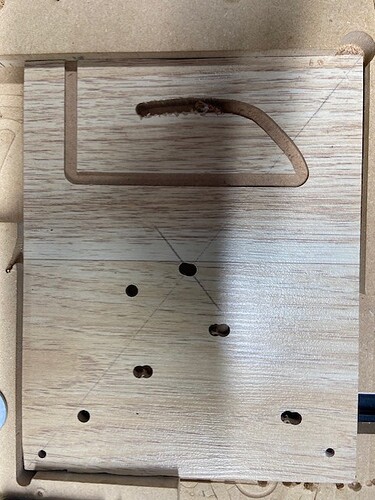 Hi Mike - did you check if your machine y rails are parallel and square to the z axis? There is a thread about the y rails being a parallelogram rather than a rectangle, which causes the problem you are seeing.

Tom, thanks for your response. I did check the alignment of the rails using the fishing line method I learned here. Everything was square. If you look closely at the photo, you’ll see two "X"s marked in the center of both sides of the test piece. Manually inputting the same G-Code coordinates made my spindle align perfectly with the marks on both sides. From this I deduce that there must be something in the software causing the problem, but I can’t find it. I thought it might be the alignment offset in the job setup, which has bitten me before, but it’s not.

But here is an opportunity to thank you for your YouTube videos, from which I have learned a great deal!

You should use two dowels to align . If your design is not absolutely centered in your work space it will not align when you flip. Dowels give a reference to align on

Ed, I might try the dowel method, but I’ve had good luck in the past with my L bracket fixture. In the meantime, I’ve discovered that my crosscut sled has somehow become unaligned. When I built it, I aligned it using the ‘5-cut’ method, but now when I measure the parallel sides of my blank, there is a .040 difference over 6 inches. I’ll try to realign it tomorrow and see what happens.

the fishing line method is for checking the machine for twist, not for rectangularity. That are two different things that have to be checked independently. For correct alignment when doing tiling or two-sided milling, it’s the rectangularity (“squaring”) of the machine that matters.

One way to check this is the following:

Is your router frame a parallelogram? Mine was!

Create a rectangle as large as the workarea as g-code and run it on the machine using a v-bit (with minimal cutting depth), and then use a bar gauge to check whether or not the diagonals are equal.

Is your router frame a parallelogram? Mine was!

Regarding two-sided projects, a single L bracket is not able to ensure the correct position of the workpiece. That’s why when doing tiling or two-sided milling, you use at least two dowels which should have the greatest possible distance from each other. You don’t forcibly have to drill dowel holes into your wasteboard, you can use a helper board that holds the dowels for a project.

+1 on using dowels, if I was a betting man, this will fix your problem. I bet you are flipping your piece on the Y, not the X, which also supports the issue you are experiencing.

You’d lose. Definitely flipping on the X-axis, a Y-axis flip would cause a different and much bigger discrepancy. I may wind up going with the dowel method, but as the method I’m using has been so successful in the past, and is a lot less involved than dowels, I will keep trying to remedy the problem. I think I may have found the issue, I’ll keep you posted!

Yup, I said that wrong. I did mean the X-axis, but I cannot retract it and accept the loss. Thats why I don’t bet

But I do stand by the dowel pin process. I would never do a 2 sided job without them now. Keep us posted.

So, turns out that the back fence on my crosscut sled had swollen locally in the way of a screw hole. This led to some erratic alignments when I attempted to align it using the “5-cut” method. When I turned the piece around to get a flat side, it seemed to work OK, but I’m going to rebuild the sled using some beefier material. I’ll definitely update, but it’s going to take a few days to get to it. Thanks to everyone for chiming in, I appreciate you guys.