When/if I outgrow the Buildbotics controller I may choose to use Bart Dring’s Universal Controller.

I’m not an expert in this field but I see mention of StallGuard support. I’m hoping this would allow a controller upgrade without having to add limit switches.

Interesting. Looks like the “StallGuard” isn’t recommended for high-precision, but this is pretty cheap for a 5+ axis controller.

I think I would look into using an opto over a mechincal switch. If you’re using something like the Suck It dust boot there shouldnt be any problems. Even if there is a simple blowing off of the opto before homing would solve it. It’s not like the 1F needs to be homed all the time. With no moving parts they last a very long time.

If you want to be really robust, you can always use hall effect sensors. No worries about dust (at least until the machine itself can’t move

I just thought I’d follow up and see if anyone has integrated this controller with the 1F? I use one of Bart’s other boards for my homemade CNC and it has worked out great. The amount of work and active development that is going into FluidNC software is amazing. (I use the precursor: Grbl_ESP32).

I love the design of the 1F, but every time I go to order one, I see a post by someone that a problem with the controller and I hesitate. And maybe I’m only seeing the problems and not the 10000+ others where nothing has gone wrong.

That is a likely scenario considering how many have been sold vs the number of reported issues (that were not user error) you see here.

Forums are almost always a poor indicator of the quality of a product. The vast majority of customers tend not to join in the first place. Of the ones that do, most participate for non-problem content. Subtract out the shipping delay questions, complaints or issues and you get a small minority who have a real problem. Of these you want to consider how 1F Support has managed and whether anyone is left whose problems are not solved. I’m willing to bet that’s a near-zero number. I haven’t seen any irate postings from someone who has not been able to get their issues resolved. You would expect that if there were such people they’d not suddenly go silent after spending thousands of dollars.

More important in my experience is how the company’s support addresses issues rather than the selection bias seen in online forum reports of issues.

If you’re not in the US/CA then you’re taking a bit of extra risk due to the costs of getting parts and the logistical issues of providing support across the timezones involved with extra-continental support.

I absolutely agree with everything you said! I’ve seen the great support folks are getting and the active forums are a wealth of information and additional knowledge.

The question for me is not whether to get one, it’s whether or not to get one with the controller or build my own.

That’s a tougher question. There have been a few people who have used their own controller(like a Masso), but you’re into the d-i-y space. You’re going to spend a fair amount of time building your CNC vs. using your CNC. Depending on what you want to do with it, that may be a good thing or not. If your only concern is reliability, then I’d get the 1F controller and you’ve got warranty support to make it work with the rest of the 1F components.

If you really want some features in the controller that aren’t available from the 1F stock controller, then yeah, get the 3rd party one because it’s the features you want. The reliability may or may not be any better, as you are dealing with small batch electronics. But you’ll lose the ability (except through the forum) to get any real help with making it all work with the rest of the 1F hardware. You might want to PM a couple of the folks who are rolling their own in terms of the controller to see what their experience has been and more importantly, if they’ll help you should you need it.

I built my own controller and am very happy with it. I think one of the hidden issues with the supplied controller is that there are so many brand new users that have never touched a CNC before, that they don’t know what they don’t know. Meaning, they have no basis of comparison, so they don’t know what’s missing that’s found on most other controllers. I’ve played around with my bb controller just on the desk. I really wanted to like it because I truly admire the touch-screen. But as an experienced user, I felt like I had one hand tied behind my back.

As far as the machine itself, you can’t go wrong. It is highly worthy of a decent controller.

Another option would be to get the controller directly from Buildbotics. It’s interface is virtually identical to 1F. It now has the added STEP and DIR outputs that you can use if you want bigger motors or want to go closed loop. It doesn’t have a power supply so you’ll have to add that. That will give you a few more feature with a only little more work

I ended up buying one of the 6-Pack controllers and hope to install it with some external TMC5160 drivers and a 24v PSU I have laying around. If others are interested and motivation pending, I can try to document the upgrade. I plan to try and use StallGuard for homing and use my Onefinity Probe for things that need the accuracy/z-probing.

I for one would be interested in learning more while you implement your project.

I’d also be interested to hear how the 6-pack controller works out for you. I’d like to have some capabilities that the Buildbotics controller doesn’t support:

For us relative novices could you expand upon these items not supported by the standard controller and why we might want them? Like someone wrote above, we don’t know what we don’t know. Thanks

Sure. That’s a lot to cover, but I’ll try to at least provide some relevant links.

The independent Y-axis ball screw gain adjustment is a seemingly simple software enhancement that would eliminate a major source of inaccuracy on my own Journeyman. This feature request gives the details.

Surface contour mapping allows you to machine features relative to an actual workpiece surface, rather than to a theoretical planar surface. There’s a good discussion of it in this thread. The intended purpose is pretty cool. But I learned of it when a CNC woodworking friend suggested that it cold possibly be used to compensate for the measured rail sag on on my own Journeyman. I measured about 0.010" of combined X- and Y-axis sag when the makita router is moved to the center of the machining area, which will result in a slightly dish-shaped spoilboard surface and slightly dished workpiece features. Now mind you, that’s a very small deviation over a 32" x 42" working area. Negligible for most woodworking purposes.

A rotary axis would extends the utility of a Onefinity into CNC lathe territory. I’ve designed a table for my Journeyman that could accommodate a rotary axis such as this one. But alas, the 4th axis capability of the 1F Buildbotics controller is consumed by the second Y-axis motor. I didn’t think I had any immediate need for this capability, however, until this afernoon when my wife suggested that I should replicate the hand-turned ice-cream scoop handle that I made a few years ago as a Christmas present for MANY of our friends … 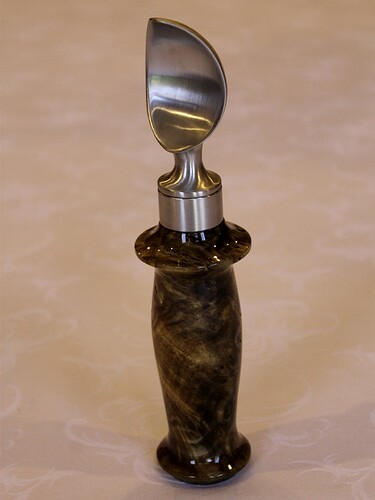 And finally, the feed-rate override is simply a knob or slider on the controller that allows the operator to increase or decrease the programmed feed rate by some limited percentage. Again, you can do this by going through all the steps to rebuild and load your G-code. But if you can adjust the feed rate on the fly from the controller, while watching and listening to the cut in process, it’s much faster and easier to optimize speeds and feeds.

Thanks for taking the time. That was a very clear explanation.

I have one sitting on my shelf. I would love to see your project!