Anyone using the Onefinity to make prototype PCBs?

Have not yet but it is something I would definitely would like to try. Going to follow this one.

Definitively on my project list when I get my 1F…

Probably not, but I will be using my OF to cut the panels after the fact. For ~$30 US, it’s far easier to send it out for fab and futz with doing it in-house. That said, if you need something quickly, and your board has relatively big traces, in-house is an option.

Has anyone tried this yet? Just got my 1f and my son is looking to make some PCBs. I’m wondering what you are using to create the file to be milled.

Has anyone tried this yet?

I have not yet but my typical consideration is, anything a Shapeoko can do, Onefinity can do better. Since the Shapeoko’s been demonstrated on youtube as being capable of milling pcb’s, I would bet my Onefinity on that any Onefinity can do it with ease.

I have created a few on the Onefinity but I still prefer the UV developed mask if I’m making them at home. What part of the process are you starting at? Do you have a layout that you’re looking to convert to gcode or are you earlier in the process of creating the diagram and layout?

You must ensure your wasteboard is surfaced and flat to the machine as you’re only cutting .005-.010" deep through the copper plating and any variation will affect the end product.

Right now just in the “if I wanted to do this on my CNC could I” phase. My son and I like to tinker with electronics. We usually just use prototype boards, but figure it might be fun to try it on the CNC.

Has anyone tried this yet? Just got my 1f and my son is looking to make some PCBs.

I use gEDA for making the schematic and pcb for the layout. Both are Free and open-source Software.

There are other EDA softwares. Some use EasyEDA.

Next step is to convert gerber into g-code:

I’m wondering what you are using to create the file to be milled. 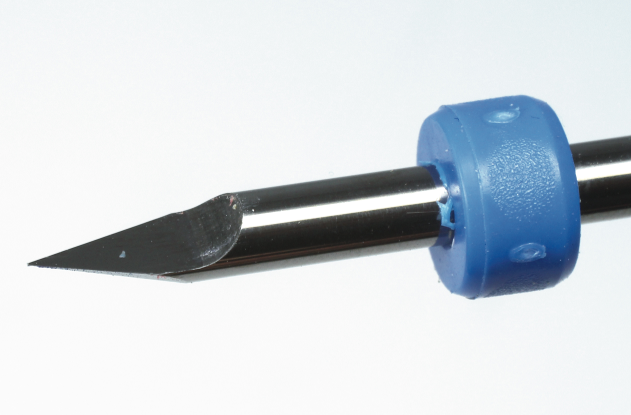 Picture: Graver from the sign making trade: only one cutting edge, but extremely sharp and pointed. A small supply is advisable, because the tips break easily. Gravers with a 30° tip angle are best suited for isolation milling; the tip rounding should not be greater than 0.1 mm.

Note that a vacuum table is of great benefit for this type of CNC work.

Yes it’s very possible, I’ve used it to prototype some boards and make a few that I didn’t have time to wait 2 weeks for professionally made ones. On larger boards (over 4"x4") variation in the board thickness and flatness could become a concern which is why I tend to use the UV cured masking and etching followed by UV solder mask and tinning. Either way I use the Onefinity CNC to drill through holes.

I’ve used Fusion 360 (paid subscription required) for more recent layouts mostly because some of my circuits have to fit in the electronics cavity of a guitar that can be odd shapes or EasyEDA + FlatCam to make the g-code, both options work well.

I have created a few on the Onefinity but I still prefer the UV developed mask if I’m making them at home.

really? I have been doing this for decades and was glad when the services came up where you can let others do it. And the situation today that I can make it instantly and at home again without any need of chemicals like the developer and the etching bath, for this I am so thankful.

You skipped the previous sentence:

You skipped the previous sentence:

I read that, but forgive me if I don’t understand, what did you want to point me to?

I only make my own when I don’t have time to wait or I’m just prototyping something, otherwise I order them.

I only make my own when I don’t have time to wait or I’m just prototyping something, otherwise I order them.

I think I already got it the first time I read it. What I wanted to say is, I’m glad I don’t have to deal with chemical baths anymore because I can either have them made by a service (for a while already) or I can mill them at home today without the need for chemicals. Or maybe I should say: the return of the ability to make them at home, but this time without chemicals, was welcomed by me.

I had mixed success milling pads for the ESP32 QFN specifically and find chemical etching to be more reliable vs the milled traces where bridging was occurring between traces where the copper cladding was shifted or peeled up in between the pads. Since I’m using UV cured solder mask all the tools are readily available to use UV mask for etching too. I learned how to make PCB in the 1980s using tape for the traces and stickers for the pads and holes at 2 or 4x scale on clear film back then, old habits die hard I suppose.

I had mixed success milling pads for the ESP32 QFN

my old habit is to try to still get as DIP/DIL what I can, also because I am a breadboard user. QFN is hard for the CNC I imagine. I mainly use ATtinys (SOIC) or a INA163 the other day.

I learned how to make PCB in the 1980s using tape for the traces and stickers for the pads and holes at 2 or 4x scale on clear film back then, old habits die hard I suppose.

We seem to have a similar age. I remember the lines and pads I used very well. I also still own a pcb with a layout I painted by hand with a etching-resistent covering lacquer using a paintbrush, etched and ready to use. Later I took my layout drawn on paper (was faster) to the copyshop to copy it on transparency, and since it was not opaque enough for the monstruous nitraphot lamp I redrew everything with edding 404 EF

as for methods you can use to make individual circuit boards at home or for prototyping, besides traditional photoengraving with subsequent chemicals etching and the newer method isolation milling of pcbs, there is a third method that you can try out if you own a cnc machine with a strong enough laser: Laser resist ablation.

In German Make Magazine 5/2018 there is an article that describes the method: You spray a bare copper circuit board blank with a lacquer that you selectively remove again with the laser according to your pcb layout file. In the article they report that when looking for a suitable paint they ended up with a black lacquer based on nitrocellulose. The carbon black used as a pigment absorbs the laser energy excellently, which, as they say, cannot necessarily be said of other colored pigments. They also found that a thin film of paint remains on the lasered areas, even multiple laser passes did not manage to remove this residual film, so they removed the paint residue mechanically. They used an old electric toothbrush for this with normal toothpaste as polishing agent. This had the advantage that the circuit board was perfectly clean for the subsequent etching process.

And they went even further: As next step they also made the solder mask with the same technique.

Finally they used the laser cutter to also produce a stencil that can be used for reflow soldering SMD components, with which the solder paste is squeegeed through onto the board.

Note that if you have a laser cutter strong enough, you could also try Laser etching, which removes the copper directly by the cnc laser.