I’ve built my system with a 2.2 KW Huanyang VFD and spindle instead of a router but I ended up purchasing GT series VFD instead of the HY series discussed in the YouTube videos I’ve found.

I wouldn’t have thought it would make a big difference but, clearly, the VFD setup is different. The issue I’m having is with the RS485 comm setup. With the GT series VFD I’ve selected the comm setup, from page 74 of the manual (you can find a PDF of the GT manual at https://www.automationtechnologiesinc.com/wp-content/uploads/downloads/2018/08/GT-series-manual.pdf), is as follows:

I’m probably missing something, most likely, or maybe the Onefinity code is setup for the HY series exclusively?

If you have any insights, I’d sure appreciate hearing from you.

Thanks in advance for your help.

I expect you are right that it shouldnt make any difference.

I had trouble setiing my VFD up

from what i have seen in the forums it is typical to have to set frequency, current and voltage settings in the vfd. You dont have them listed above.

Configuring a custom VFD and spindle How To

Hi, Has anyone ever used a FULING VFD with Onefinity controller that could share the wiring, setting and experience?

Hi all, anyone with any experienced in setting up an Optidrive E3 VFD with the onefinity?

Mr VFD @Aiph5u seems to be away from the forums at the moment. He answered many peoples questions. Theres also facebook.

Did you get your VFD working. i just got a GT Series and have it running with Modbus.

I used the Custom VFD from the pull down instead of Huanyang. I think the Huanyang shownb is for the HY model.

In addition to the settings you show on the VFD I also made the following changes.
P0.021 - 2 (Run Command from Communication)
P0.07 - 7 (Frequency from Remote Communication)

In the Onefinity tool menu with custom VFD selected then press the customize button and input the register data. In the Huanyang Manual the numbers are in Hexadecimal but you need input regular decimal into the chart. If am posting properly my settings are shown on the pic below. Yours may be different so confirm everything for your own machine. I am by no means an expert so I could be giving horrible advice. 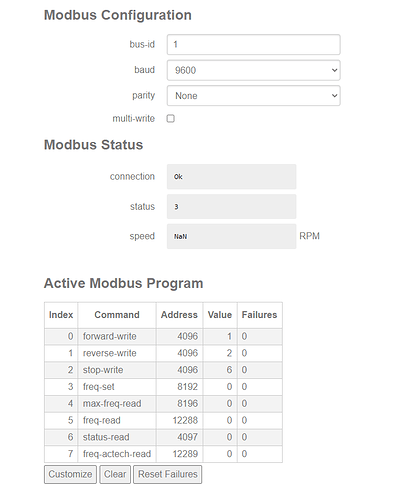 Did you get this resolved? I just set mine up and it works. I noticed theres some items you didnt set on the controller.