I’ve made several of these pencil boxes for my grandchildren using various pieces of scrap material that wasn’t big enough to make much else with. After a couple of runs I figured out how to use design variables in VCarve to automatically set the depth and offset for the dovetail joints based on the thickness of the lid. So now it’s a pretty simple job to make another one when the size of my scrap pieces are slightly different. Just change the dimensions for the box and lid, along with the text for a new name, recalculate, and it’s ready to go.

Adding the magnets makes the lid snap into place when you close it. One trick for making the magnet holes is to use a 1/16" end mill. This results in a flat bottom hole. If you use a larger end mill it doesn’t move around much so the bottom of the hole is crowned and the magnet doesn’t lay flat and isn’t recessed enough.

The other tricky part is holding down the lid so you can cut the dovetail all around. Basically you have to cut the rounded portion with one set of hold downs and then setup new hold downs to cut the sides. 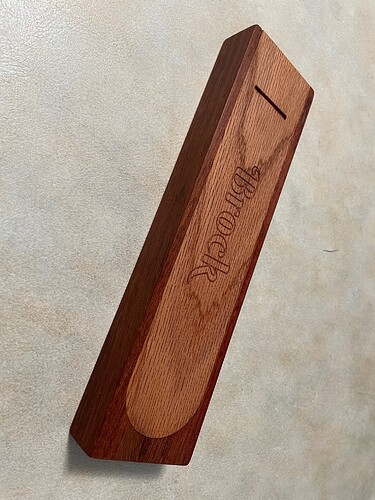 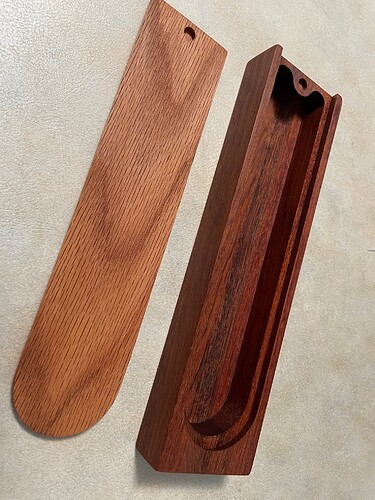 why not blue tape and crazy glue to hold down the lid?

Blue tape and CA glue might work. I normally use my T-track with hold downs so I don’t usually think about alternative methods to hold things down. I’ve got a good system going now. Maybe I’ll try one just for kicks to see how it goes. I could pre-cut the radius so the dovetail isn’t taking such a large cut when it goes around the end.

Yeah if you haven’t tried it it’s very very useful. I was the same way but mostly have shifted to tape.

It might be handy to make a sacrificial wasteboard so that you’re not digging into your main one.

I’m curious which 1/16em you are using, and feeds/speeds?
I’ve been looking for one that will be reliable.

I generally go a little slow, particularly when I’m cutting hard stuff like oak and Brazillian Cherry. My feeds and speeds those those were 18 inches /minute with a speed of 27,000 rpm.

One reason I go slow is that I’ve had issues when going too fast in hard material I start getting chatter and then the router bit slips down and cuts too deep. One time it went down so far that my machine snapped the 1/4" router bit in half. I’m not impressed with the collet on the Makita router.

One item is that when you have two sheets with different thicknesses (box body and lid), there isn’t a built in way to reference the lid material thickness (Z) when creating formulas for the box body dovetail. To get around this I created a variable named “Lid_Thickness” that can be used. The only catch is that you have to remember to change the variable if your lid thickness changes. I mentioned this to the folks at Vectric, so maybe one day there will be a way to specify which Z value you want to use. My suggestion was to have the variable name go something like “z.sheet_name”.

To cut the dovetails I create one set of vectors that get copied to both the lid and the box body. Then for the lid you cut on one side of the line and for the body you cut on the other side of the line. You also have to cut the lid from the bottom side. The formula for the offsets are as follows if you have a 14 degree dovetail bit. Where the design variable “Tan14” is defined as the tangent of 14 degrees.

Also, for the box offset, I added .004 to provide some clearance so the lid slides easily. Cut the lid first, then cut the box. If the lid fits too tight, change the clearance value and run the box again and test the fit. Do this before you remove the box from your table.