I am developing a program to automate calibration when cutting mulitple angles on a part. My problem is that when I issue the command G38.3 and the probe doesn’t get any contact… it results in permanently disabled controls.
Description of the command: 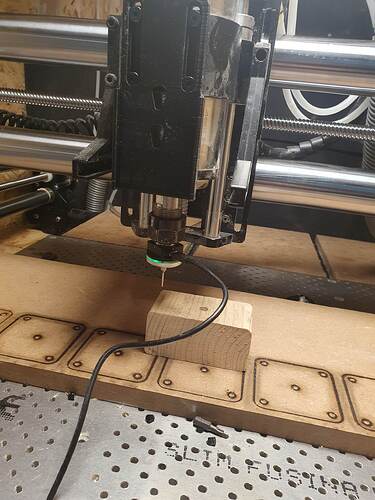 Whats the deal with the controller not taking any more commands? I litterally have to restart the machine before it will accept any more commands, but it should just stop and do nothing further. Is there any commands to reenable controls?

I have been wanting to use a touch probe like this, but had some questions:

G38.3 probes towards a target and stops on contact. No error is given if it fails to trigger the probe.

Sure G38.3 does not abort program with an error when probing fails (as G38.2 does), but what do you want to do with such a result? Usually proceeding with the program makes no sense when probing failed (except if you like workpieces destroyed).

It’s only after successful probing that parameters #5061 to #5069 will be set to the X, Y, Z, A, B, C, U, V, W coordinates determined by probing and can be made the new active coordinate system with G92.

Well, I am not running any program here. I have written a console application that communicates with the onefinity the same way the web interface does. I made it in order to automate calibration. It will measure my stock, add some holes that it can later probe when the stock is flipped in order to save me time aligning the part. I have even made it so that it can provide a skew along the x axis that I can then insert in fusion 360 to rotate the part before starting CAM. I add the probing results to fusion 360 because last I tried, the buildbotics controller of the onefinity machine doesn’t understand G92 with an angle.

Anyway the reason I would like to use a G38.3 that doesn’t touch anything is to protect the probe. Imagine a hole added in the stock for calibration, but the probe isn’t inside the hole before lowering the probe into it… in this case I am using G38.3 to probe into the hole and cancel the calibration procedure if the probe hits anything unexpectedly.

Looking at the Onefinity index.html page code where the probing routine is located, the last G-code command issued after probing is M2 which I see defined as “Program End” and could be performing this “stop” action/command as mentioned?

Well, I am not running any program here. I have written a console application that communicates with the onefinity the same way the web interface does.

Interesting. The last time I thought of doing this, it was when I was thinking of implementing a hardware-based pause button (useful to be triggered by an emergency circuit). But since I don’t plan to use that controller, I didn’t pursue it.