How high should I mount my spindle?

I started the installation of my PwnCNC 80mm spindle tonight. Since the spindle is so long, where should I position the spindle in the mount? Danny’s instructions don’t specify and I couldn’t find anything here in the forum.

My suggestion is to mount the spindle in a way that you achieve the full vertical capacity of the machine, i.e. 4" beneath a bit.

This means you will use the bottom most holes in the 80 mm Z spindle mount to the X carriage. This will position the Z frame/mechanism so a bit’s tip will get you slightely above the lowest part of the frame. 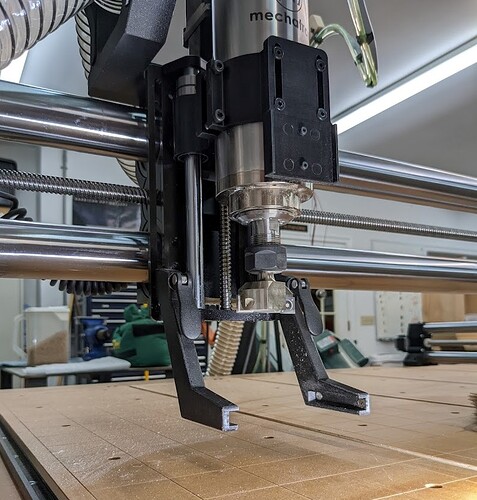 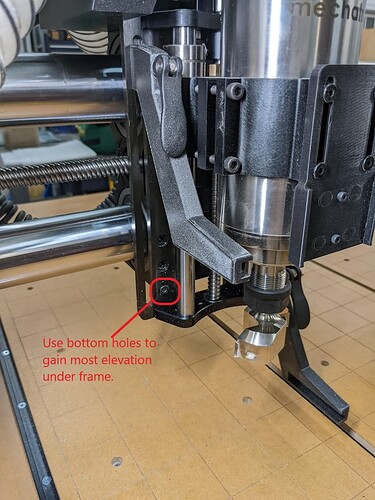 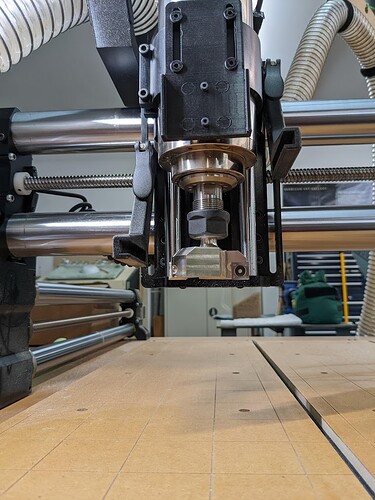 Looking at a PwnCNC spindle also and had a few questions:

How long did it take to receive your spindle after you placed the order?

Did you get the kit or just the spindle?

Looking forward to hearing/seeing how it goes!

Interesting. It looks like you have yours fairly high in the mount with the Z carriage mounted higher. I’ll take a look at that and see what kind of travel I can get.

I do have to ask about the flip latches you have on your dust boot arms. Did you find those online or was it something you came up with?

I ordered the whole kit. 2.2kW 220v water cooled. I ordered before they were shipping, but only by a week or so. I had it in less than a month.

So far I have only changed out the 1F mount to the 80mm and then swapped the water fittings for the Kool connectors. I’m a little concerned about that. The threads on the Kool connectors isn’t the same as what the spindle came with and I might have run the first one in too far. It broke a little loose and I stopped. Hopefully it didn’t just rip the threads out and will end up leaking. I’ll find out in a couple days when I get the rest of it put together.

Those are called Cam Handles and are available from McMaster-Carr…

Position it so that with the axis all the way down your shortest bit can still touch the top of your spoil board.

Thanks for the info, Mark. Hope your spindle is OK!

I love my PwnCNC spindle. I purchased the 2.2w watercooled kit with the Kool connectors. It runs like a dream. The only thing I would have changed was to have a 120v water pump in the kit instead of the 220v that comes with the 2.2w spindle (it is 220v). I bought a pond pump off of Amazon and works just fine. I got it the week I ordered it.

Coincidence that you posted this just now. I’m back working on mine and just doing the pump when I got the email notice. The pump in my kit is 120v. UPDATE: I just noticed the box says 220v/50Hz, but there’s a label on the pump that says 110v/60Hz. It came with a standard 2-prong 110v plug.

I put the spindle as high as I could and still have my spoilboard surfacing bit reach the spoilboard. I just looked and I might have an issue with some of my smaller 1/8" end mills and v-bits reaching that far, but I can adjust it later if I need to. I did put the z-mount up higher (lowest holes).

Finally got to run the pump this afternoon. I had to add a switched outlet in the back of my setup with the switch in the front just below the controller so I remember to turn it on/off. The good news is no leaks. Whew!

Thinking of pulling the trigger on a PwnCNC 220V/80mm/Water-cooled package. How’s your experience been now that you have 8 months or so to look back on the purchase? Would you still do it? Would you instead buy the parts yourself? Any guidance would be greatly appreciated!!

Hi Jim,
I have been extremely happy with mine. Just as a basis, I am just a hobbyist. I don’t make products to sell. So I am not running it for hours on end every day.

I absolutely would do it again just like I did - having the whole package made getting it up and running a breeze. I didn’t want to get into buying the individual parts and having to figure out how to program the VFD and controller. His instructions were easy to follow and I was up and running with no hassle. Yes, it cost more but I don’t regret a penny of it - the time and aggravation savings was worth it for me. Not having to deal with the Makita router has also been a plus.

I know that Danny has enhanced the kit now and has an enclosure for the VFD which looks like it makes it even easier and gives you a Manual/Automatic switch. I have only needed to run mine manually a couple times and it is easy enough to enter the MDI commands in the controller screen to run the spindle without running a gcode program. Usually when I do this it is to surface a workpiece using the 1F wireless controller.

I ended up having no leak issue with the Kool connectors, but see my comment above about the threads. Be careful not to over-tighten those. I replaced the supplied water lines because I wanted longer ones to run inside of my drag chains. I am using a waterproof storage bin from Home Depot, and I use a less than 50/50 mix of antifreeze. I have run some longer carves and have had no issues with the spindle running hot. I have considered getting a chiller, but it would be for peace of mind more than needing the cooling. I would assume a chiller pump would have a longer life than the cheap pond pump. I always look at my lines with I turn mine on to make sure the pump is still flowing.

The water-cooled spindle is really quiet. That benefit kind of goes away when I fire up the dust collector and start cutting, but not having the scream of the Makita in addition to those helps.

I have run everything from 1" surfacing bits, 1/2" shank 1/2" down cut end mill, all the way down to 1/32" end mills. It looks ridiculous running a 1/32" bit in an 80mm spindle, but it works beautifully doing intricate inlays.

My only complaint at all (and this is really minor) was that the yellow coverings on the PwnCNC collet wrenches both split and came apart within a month or so. I solved that by removing them, cleaning the handles, and using Plasti-Dip. I did 7 or 8 coats and that has worked out great.

I also have to say that dealing with Danny at PwnCNC has been a pleasure. I have also purchased some of his dust collection stuff including digital files so I could 3d print my own and he has been great to work with.

Lastly, if you want to see my setup, I have a webpage that has pictures and shows how I did everything: CNC Prep

@Mystic6 Hey Mark, great webpage. That’s going to help me a lot when I get my spindle and Z20. Thanks!!

Happy to help! Let me know if you have any questions along the way. I’m certainly no expert, but I’ll help if I can.