I think if you have the option to use MODBUS you use it. It has 2 way communication and more fine control over speed, etc. I set mine up to use MODBUS.

Thanks for the reply and a very clear one at that, I appreciate it. Assuming you have the HY VFD, what settings did you use to set up the VFD. I will be using mine on the Woodworker Elite / Masso Controller
Thanks again
Pat

the settings you have to enter into your VFD depend on the technical data of your individual spindle. Do you have your spindle datasheet at hand?

Then, have you read the fine manual of your VFD entirely?

Aiph5u,
Thanks for the reply, there was no data sheet with the spindle but the pertinent info is printed on the outside of the motor, thanks for the link, very helpful and yes I have read the TFM, it is a little confusing with the translation but will get there, I just finished setting up a Hitachi on a small lathe i built and it is working although I have issues with Mach 3 and speed control voltages that seem to be very coarse, only about 5 speeds every 100 RPM or so, hope to figure it out. Expecting the Masso to be much better than Mach3.
Thanks Pat

Aiph5u has provided you with some good info. I’m reluctant to publish my settings (although they are based on what I saw in various places with cross checks to each other and the manual) because my setup has not actually been used for cutting yet. I got it together on Sunday but I’m still awaiting a 1/4" collet so have been unable to put a bit in yet to use it. I’ve used a digital tachometer to confirm it is running at the right RPMs but so far it hasn’t been under any real load.

yes the cheap chinese VFD manuals are very lousy. First they are not didactical at all and secondly they are not written by a native writer of the target language, but instead from what the chinese get by auto-translation from chinese. But if you say you set up a Hitachi VFD, you should have read a Hitachi manual which not only is very good (with its e.g. 418 pages for the WJ200 series) and if you look at the Omron MX2’s manual, which is practically identical with the Hitachi WJ200, you get it written in english, czech, german, spanish, french, italian, polish and russian and they are written by native target language writers.

So if you read a

you can deduce a lot of knowledge from it, even if the parameters are called differently in the various VFD brands.

No problem,I totally understand, my main reason for the post was the difference between the RS-485 and the analog input, looking at the Masso site their sample wiring for the HY VFD shows the 0-10 Volt input so not sure if they support the RS-485 protocol.
Thanks, Pat

so not sure if they support the RS-485 protocol.

the Masso not. But most CNC controllers do.

On the Masso, the RS-485 hardware is present, but its support is not yet implemented.

On the other hand, all VFDs I know support spindle speed control by analog voltage. 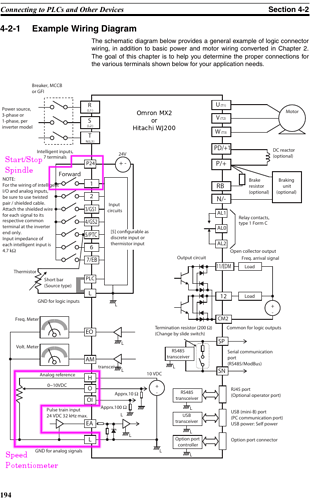 Funny thing, I just finished setting the VFD up and all the parameters were populated correctly already with the exception of the settings to change to analog control.
Thanks, Pat

The HY one? I had many correct, such as the 400 hz and I think the 220v voltage. That surprised me too. The VFD also came with a sheet of paper listing what to use for a spindle and some other tool (lathe or something, didn’t pay attention to that). I hadn’t seen anybody mention that paper before. I did have to change PD142, 143 and 144 if I recall correctly. I also set PD011 to have a minimum frequency. I also had to change the control and related modbus ID.