I’m wondering the same thing. I have about 10 weeks before my journeyman comes in and I want to build a table and wasteboard. Anyone able to answer Pete’s question?

How do you mean the question? Are you asking the cutting area of Journeyman Machine? Or do you ask about the space between the feet of the machine? 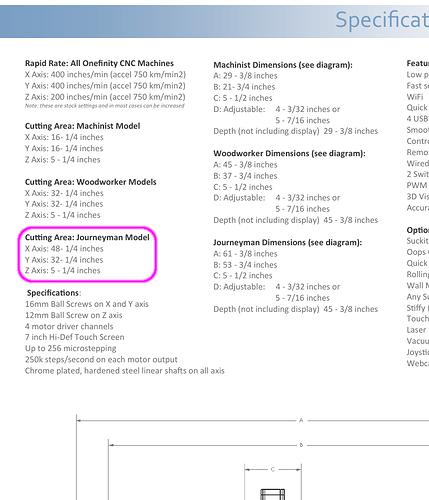 I haven’t found much on required table space for the Journeyman X50. I’m trying to decide if I can make use of this bench that I have or need to build new. This is very sturdy and rigid. Just the frame weighs over 250 pounds (two people can not pick it up) and is made from 1/8" x 2-1/2" steel angle all welded together. I covered the top with 3/4" ply and had my benchtop mortiser and a big dovetail jig mounted on it. Both of those are gone now and I’d like to use this but the problem I see is t…

The above forum discussion talks about effective table sizes - among other things.
Your plan to maximize a 4X8 sheet of material for both table and waste board should work, however as mentioned in the discussion, 1F recommends a width of at least 72X49.

The above discussion stresses that a width of 62 is bare minimum, leaving no supports for cables or controller beside the CNC.

What would be the width requirements of space to accomodate the new Journeyman X Axis component? My space is about 60" wide by 48" so I am wondering if it would fit.

with motor, it’s exactly 61 1/4"…and that’s without giving the motor air to breath or the wire that comes off of it room to freely move or hang…

I quoted that because it differs from what’s in the specs, where it says 61 3/8″ (when I get the machine I will measure how much it really is).

This definitely helps me visualize things. I was hoping to use an existing workbench, but I think I’ll need to build a new one just to be safe.

What would you recommend material wise for the top of the table? I’ve read some people using plywood, others using MDF.

I figured using 2x4’s for the frame should be ok. This is a pic of the current table I was originally going to use but it’s a little too small. 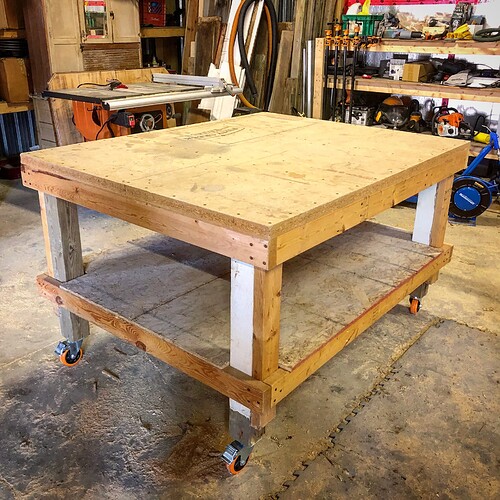 My table is 70" x 50" and I think 70" is the bare minimum I would go. 48" would work for depth. My MDF spoilboard is 49" x 40" and is too deep if I want to tile. It may not show up in the pictures but my spoilboard cutter couldn’t reach the ends. It’s not too much of an issue as I could use a hand plane to remove the lip if needed. 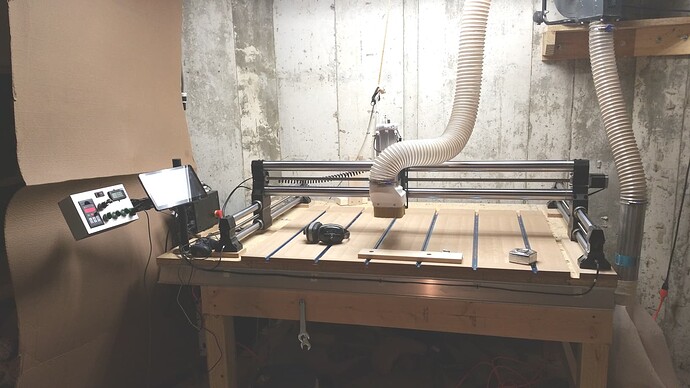 One F 11632×918 124 KB
I have a little over 8" between the controller and the Y axis and that is barely enough. The controller is mounted to a block of wood and hangs over the side. While it doesn’t look like it would there’s the possibility of the X and Z axis wire getting caught on the E stop button. 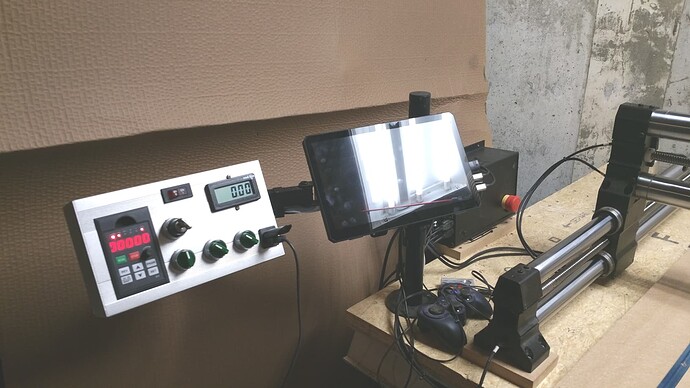 Depending on how much it is, you might be able manually to remove the excess with the joystick controlling the spjndle and set the depth of cut via MDI. It’s what I had to do.

I surfaced it manually with a CMT 2 3/8" surfacing bit to get the full range. I didn’t have my truck so I had to have the 4x8 3/4" mdf cut down to 60". I used the cut off for the spoilboard. I could have ripped it down but I figured having extra depth for support for clamps would be useful if working on something close to the maximum size of the Journeyman. I have one of those hand held power planers that would easily take care of it but until it becomes an issue I’m not going to bother.

That’s a very nice-looking setup for your VFD panel! Is that something custom you built that you could share details on?

It’s just an aluminum project box I bought off of ebay. The HY VFDs have a remote panel that snaps into the VFD. For a few buck I was able to get an extended cable and remote plastic box for the remote (https://www.amazon.com/extension-control-Huanyang-inverter-accessory/dp/B07BS8HHJS). I just cut the hole for it and the water flow display. I have the VFD and several solid state relays inside an old computer case that’s below the table.

What was the size of your spoilboard? I have the Journeyman and marked out the machine limits with the joystick and a pen in the collet. I made my waste board to match those dimensions. So it is 48x32. Should I have made the waste board smaller than the machine dimensions? Will I get the soft limit error when trying to surface it?
Thanks for the help!

if you want a spoilboard that you can surface, you make it at maximum the size of the area you marked with the pen and added the diameter of your spoilboard cutter (=2 times its radius) to both measurements.

If you make it that maximum big, you will still have a little surface in the corners not machined. You can remove this with a hand plane. In the video they recommend making the wasteboard half an inch smaller than the cutting area.

Thanks. I had watched those videos a while ago but had forgotten about them.

What was the size of your spoilboard?

I had to trick the 1F to cut it. I told VCarve it was a 1" bit instead of a 1 1/2" bit (and I upped my stepover so the passes matched the real bit size). I did both a pocket and an “on the line” profile cut at 0.02" which worked fine. I’ve also used the joypad to surface - ran it to the edge and then on medium speed with the router on, ran the machine all the way up, across, down & across again (use the lock buttons to keep it going straight in the X or Y direction with no diagonal movement). I used the MDI window to tell it to go the right Z depth before I started the up & across paths (G0Z-0.02).

Then I did my V-bit grid & numbers with my X/Y zeroed at the machine home. I also “drew” a v-bit at the extreme X & Y limits like running the surfacing bit to create a box around the limits of the machine on the board. You have to do this with the joypad because the controller will throw you a “too large” error if you want it to do it for you.

I can put my material on the box corner and it’s the same as the machine home. I can also align things at any 2" intersection of the grid lines (my grid is at every 2" on X & Y). I also have 3 circles - a 4, 8 and 10" circle to make centering round things easier but historically I’ve not used that as much as the normal gridlines.

Well the good news is my first VCarve file and OneFinity Journeyman CNC cut worked! It cut all the way to the dimensions of 48x32. The interesting news was the cuts left waves on the mdf waste board. Not major waves, but perceptible cut lines I could feel when running my hands across.
Also, I guess my Y rails were a bit off level. Bubble is in the lines but touching the rear line, so front edge would need to be raised up just a fraction. My waste board is at the same level reading. If they are level with each other is that good enough, or do I attempt to level the Y rails and flatten again?

The interesting news was the cuts left waves on the mdf waste board.

Those are from a slight out of square router. Search for “tramming” the Z-axis and you’ll find a number of posts about how to do it.

Mine has a similar issue - I’m guessing something in the order of 0.00? based on my flattening depth (0.02"). They’re visible but not ones I can really feel with my fingers. I’m waiting on my QCW before I bother tramming. My projects aren’t so sensitive they need to get any flatter.

Dang. Somehow I knew you were going to say Tramming. I have read on it, watched videos on it and I still do not understand how to do it.

Hi Jim,
So, I watched more videos, read the process again, and made another attempt. From what I can tell the z axis mount is square and level left to right and front to back. I had to shim a fair amount on the bottom to bring it level front to back. I used both a level and tried the block of wood tramming method. Found the level more useful. I re-flattened the waste board and ran it front to back in the y-axis this time instead of left to right in the x-axis like the first time. I still got the waves going front to back now, but not as bad. I could see them, but not feel them as much.
One thing to note, and not sure how much of a difference it makes, but in my excitement of receiving the machine, I failed to double check my tabletop was completely level. The bubble is in the lines, but it is touching the back line going front to back. So, in other words, the front end of my table could be raised up a slight amount. Left to right it is completely level. The OF rails are also the same level as the table. The X-Rail is completely level, the Y-Rails are the same bubble touching the back of the line. My waste board is the same. So, will this make a difference enough that I need to take everything apart and level the table? I could be mistaken, but if the machine is level with the table, when I go to flatten the waste board, shouldn’t it take more off the back of the waste board than it does off the front because it is cutting at a set depth, and the waste board after surfacing, should be completely level irrespective of the table?

So, will this make a difference enough that I need to take everything apart

Depends on how precise you want to chase this. If can see the flattening waves but not feel them you’re probably fine unless you’re chasing thous of precision.

You can also try shimming the router itself within the mount. You may find the addition of a small piece of aluminum foil between the router & the clamping mount on the side of the wave crests is enough to take them out altogether.

I was able to shim the router with aluminum foil on the bottom clamping mounts to make the router mount level from top to bottom and it still gave me the waves. Probably something I can live with for now. I cut grid lines in the waste board with a 60 deg VBit and they all look uniform depth across the board, so maybe it is good. I am mostly going to be cutting pockets and profiles on guitar bodies, so not flattening anything with it thus far.
Thanks