I just experienced a major failure in my Makita router. I was running an Amana 1.125" surfacing bit. I was getting some burning of the wood so I tried slowing down the router speed. I was taking a 0.1 inch cut, traveling at 70 inches / minutes, with a router speed of around 12,000 rpm. After about 3-5 minutes into the cut my router burst into flames. I’m assuming that the slower rpm value caused the motor to overheat. It was pretty exciting for a few seconds as flames were pouring out the bottom of the router. 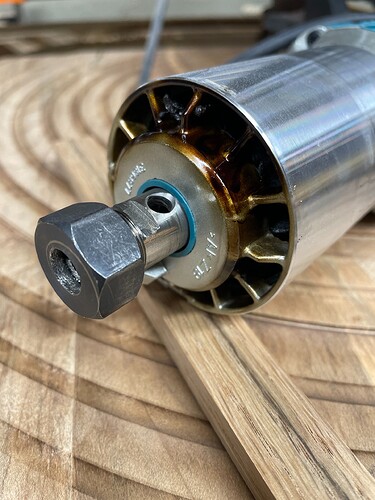 sorry to hear that! Thanks for posting the image.

In case you really have flames and want to use a fire extinguisher, it is wise to have a paddle switch near the door which separates the whole installation from electricity (besides a separate E-Stop wiring for the cases you just want Safe Torque off (STO), which is what Buildbotics’/Onefinity’s “Estopped mode” is made for).

Makita knows about this, it says:

This has to do with the type of motor, which gets hot on low speeds, and that using a bit larger than 1/2" is usually out of what a hand trim router is made for.

it has been reported and confirmed frequently that when people burnt their Makita hand trim router out, this was always when they used a bit with a diameter greater than 1/2″ , which is nothing the hand router is made for, i.e. these large spoil board surfacing bits.

My Makita router caught fire yesterday. I was about five minutes into a gentle spoil board resurfacing run when it made a strange noise. I immediately hit the stop button because I thought it sounded like the bit slipped out and was about to dig all the way through the surface- and poof- flames.
Easy and quick to extinguish the flames, but I was so glad that 1) I was standing right there and 2) was able to quickly put the small fire out.

Was working on a project the other day and the Makita got jammed in a solid piece of maple and melted down before I could get to it… shame… Now its a crunchy sounding, smoky, blue light show…
[video]
One down, 2 backup routers to go!

I would say “Welcome to the club”, but I am not part of the club, since I started right away with a spindle

Similar experience except mine didn’t catch fire, but you could fry eggs on it. Was using a 1” IDC surfacing bit with .1DOC, 80% step over, 70IPM, and rpm around 16-18000. The next time I resurface anything, I’ll try .03-.05DOC with about 30-40% step over. I don’t think it was so much the feed rate and router speed, but the DOC and step over. Ironically it’s still alive and carving. We’ll see how much longer it lasts. Live and learn! CNC is new to me, but when the successes and failures are explained in this forum, it clicks with me and I find myself saying, “that’s just common sense”, “what was I thinking?” Thanks to all!

were you surfacing your spoilboard or something else?

Surfacing something else. A 32" diameter piece of maple that I’m making into a Crokinole board.

standard (correct) answer is that the Makitas are definitely not up for that, they can’t push bits larger than 1/4", they can probably do the spoilboard bits in MDF but surfacing hardwoods is not doable and they will burn up. I think it says as much in the Makita manual.

Yes, the spoilboard. Once I got into it, I was scared to stop. I wasn’t sure with my experience level at that time, I could correct everything and have a flat spoilboard. Moving forward, my approach is to be conservative, not worry about an extra 15+ minutes on a given task, etc until I have a firm grasp on feeds, speeds, chip loads, step over, etc. A few bits have been ruined in the process, but I chock that up to the learning curve. I have the luxury of this being a hobby where others are trying to make this a living. That means time is money.

I also found out the hard way. These routers can’t deal with anything but the smallest flat bits. My first router went out after just a few months while I was using my beautiful Amana 1.5" 2+2 design surfacing bit with the replaceable inserts; ooooh, the finest end mill in my quiver. It looks like it’s going to be a paperweight now…

However, in my case it seemed to be a manner of the vibration caused by spinning the large diameter tool at 18K RPM. It was loud as hell and eventually vibrated an internal wire loose (according to the Makita warranty shop which is a 45 minute drive away). While I was waiting for the first one to be repaired I bought a backup as there didn’t seem to be a point of keeping $4K+ worth of CNC idle for a week because of a $110 router.

Today, I had a second failure (same bit) and discovered this page. I wish I had known and can’t figure out if I should be mad at myself for not knowing, mad at 1F for standardizing on such a weak machine or just chalking it up to the fairly significant learning curve presented by these fantastic and frustrating machines. (Can’t wait for the jogging lockup to be fixed in a firmware version that’s ready for the masses.)

I have the same Amana bit and only use it for mdf flattening. I have noticed that the router gets hot if I use it on anything else.

Definitely shallower passes. I haven’t had any problems using my RC-2248 on hardwood but I keep it more to 0.02-.04 in per pass

I was using it on MDF but was trying to clear a lot of material on a jig, so I was taking pretty deep passes. My gawd, talk about kicking up a lot of dust! The MDF just powders and at 18K RPM the crap is flying everywhere. The dust collector boot isn’t my favorite part of my X50 but it hardly tried on this powder. Anyone else have problems with dust? I upgraded to the “pro” kit and still have lots of problems and my vacuum is pretty strong and close by.

Maybe lower rpm? I don’t seem to have much of a problem but the basic suck-it dust boot is definitely not perfect. I have my router at 2 when flattening my waste board.

@TheyCallMeJohn Does the RC-2248 cause the router to make a hell of a lot more noise? As in sounding like it’s going to blow up? Do you back the RPMs down? What are you running at?

Those are pretty thin passes, what’s your feed rate at that depth? I’m carving mostly hardwoods as well (and some really hard) but if I could get it work, it’d be worth the time to get the really flat facing that I’d like.

Also, when using that bit with a fat step over, did you have a problem with tram? (Ridges forming.). F1 support told me not to worry about tram until I had more time on the machine (???) but I found adjusting it to be fairly straight forward. It is a little time-consuming with the trial and error but I got it to be very flat when all was said and done.

@newbiee I’ll give that RPM a try. I was at just a tad over 3 which, according to what I’ve seen somewhere, is about 18K. I haven’t bought a meter to check it and realize that every machine is bound to be a little different. Do most folks just guess or is an RPM meter a necessary investment?

It causes it to make substantially more noise I don’t know blowing up level. More like pissed off banshee. Yes definitley back the RPMs down. I burned up a set of inserts for it running to fast and shallow. I think I typically run it around 1.5 to 2 on the dial but I listen to the sound to and adjust accordingly.

I use the automatically generated feeds and step overs from fusion 360 or Vectric based on the Amana imported library. What software are you using?

I have always operated under the premise if you can’t feel the ridges that it is close enough. Mine hasn’t ever been far enough out of whack to warrant it. If you can catch a fingernail on the ridges. I would try and adjust it.

Here we go again. This is the third time the F1 supported Makita router has failed me. I have two and they’ve both have been to the warranty center once and now the first one is going back in for its second warranty repair. (And they both are only a couple/few months old.)

This time I was trying to do an adaptive clearing with a 1" cove bit into poplar and had the feed rate what I thought was pretty low (30 IPM). It was making the “pissed off banshee” noise but didn’t think it was too bad. I’ll try backing it down to 1.5 or so. But doesn’t the manual say don’t run it on too low RPM or it’ll just burn out?

Does every body sit down and calculate Chip Load for every potential cut? I’ve been using the downloadable Amana guide for F360 and have had pretty good luck but my Makita’s can’t seem to handle a bigger bits.

Uhmm, you’ve just answered your question. It’s been related many times around this forum that the Makita is WAY too underpowered to handle any bit larger than 1/4" and that running it with too big a bit at too slow a speed causes overheating due to the fan not being able to keep up with the heat being generated. Your problem is being compounded by trying to work a hardwood. You could possibly get away with doing very light passes in pine, basswood or MDF but hardwood will do you in every time. The only 1" diameter bit you should use is a surfacing bit and only for use surfacing an MDF spoilboard with very light passes. Frankly, you are fortunate not to have had a fire from an overheated router, that has also been mentioned on the forum a few ( scary) times. If you insist on using large bits in hardwoods, you will need to upgrade to a spindle.

I just got my router back from warranty repair after it burst into flames while running my 1.125 surfacing bit on maple. Finished the job with a 1/2" mortising bit running at 19,000 rpm and 60 inches/minute travel speed. Put my hand on the router body several times to check if it was getting warm. It never got really hot so I think I have my solution for surfacing materials other than my wasteboard.

Now my first Makita (of the two I have) has decided to ignore the settings on the dial and just go full throttle all the time. So, yet another 1.5 hour round trip to the Makita service center and they want to charge me $65 for fixing it. (It’s actually well under warranty so I’ll just show up with a receipt.)

Yes, it’s probably time to go for a spindle. However, 1F doesn’t “officially support” anything other than the toy-like Makita. What are the “official support” implications of running an unsupported spindle?