Got it, sorry I missed it. Then you’ll need to statically assign both devices… sounds like you’re already on the right track

Then you’ll need to statically assign both devices

that’s what I did with my Onefinity Controller here.

As root on the Onefinity Controller, you create a new file called “eth0” in the directory /etc/network/interfaces.d with a content like this:

If you add the static IP address configuration, the user interface will then report two IP addresses: 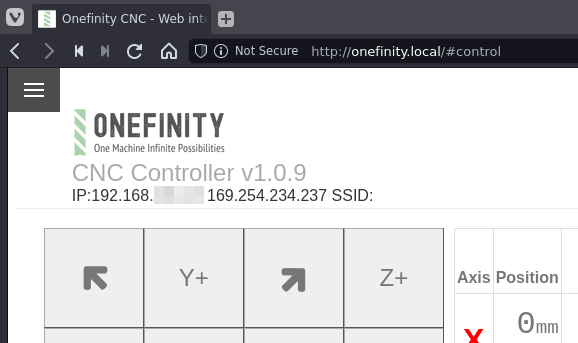 The good thing is that if you then connect the Onefinity controller to a computer with an unconfigured network, zeroconf will still work (it’s the avahi package that provides this)

Hi
Can I do that myself, give a fixed address to onefinity?

Can I do that myself, give a fixed address to onefinity?

sure. But in that case you have to set a static address on the other computer (your windows pc) too. The addresses you can use for a private network are explained here.

On the Onefinity Controller under Raspbian Linux, see my example above. The lines with the parameters network, gateway and dns-nameservers can be omitted. Under Windows, you got to click on the specific Network hardware device and edit its IPv4 parameters. Choose manual configuration, and insert the address and netmask values manually, or you can choose automatic configuration and there appears a second tab with “Alternative configuration”, there you can then enter the static values manually the same way. If you use it the latter way, it will use the static configuration only if after a timeout it has received no address via DHCP.

The question is whether you want the Onefinity Controller to be integrated into a possibly already exisiting LAN that you run at your home, or if you remain with an ethernet connection only between your notebook and the Onefinity. In the latter case, you may choose freely a network and addresses from the private address range, in the first case you got to integrate the Onefinity Controller into that network. This depends on its address range and whether there exists a DHCP server.

It is undoubtedly simpler is faster than the virtual machine.
No the pc is only for the onefinity.

On the computer I know the procedure to do that.
On the other hand not on the onefinity, can you explain to me the complete procedure please.

Once it’s done I should see the ip address appear on the onefinity home screen, right?

It is undoubtedly simpler is faster than the virtual machine.
No the pc is only for the onefinity.

On the computer I know the procedure to do that.
On the other hand not on the onefinity, can you explain to me the complete procedure please.

For more information, the corresponding manual page can be shown with:

Then to activate the new static configuration, you do:

Once it’s done I should see the ip address appear on the onefinity home screen, right?

Yes, but no need to watch it appear there anymore. The address you assign this way is static, which means, it is known and will never change.

PS: If you want to address the Onefinity Controller with a host name, you can edit the /etc/hosts file on your Windows pc. Under windows, it is located at C:\Windows\System32\drivers\etc\hosts . An entry looks like this:

I succeed.
I turned on the onefinity wifi, put in access point mode.
It gave an ip on the main page, I put it in the browser: ok.
I cut the pc’s wifi, turned everything off, turned it back on, entered the ip address and it worked.

I succeed.
I turned on the onefinity wifi, put in access point mode.
It gave an ip on the main page, I put it in the browser: ok.
I cut the pc’s wifi, turned everything off, turned it back on, entered the ip address and it worked.

However, if you configure the Onefinity with a static IP address, as Giancarlo @Tuvix72 mentioned and I showed above, you don’t need any monitor on the Onefinity Controller anymore. Then you don’t need to look up what’s its IP address is. With the example as shown above, the Onefinity Controller has a static IP address (192.168.1.1 in the example) that is known and never changes. Together with the /etc/hosts entry, you can then simply enter “http://onefinity” in your browser (and you can make a bookmark then if you like).

I unplugged the screen from the controller and tried again only with the pc keeping the same ip address, it works.
Maybe having defined the controller as host gives a static ip.

I unplugged the screen from the controller and tried again only with the pc keeping the same ip address, it works.
Maybe having defined the controller as host gives a static ip.

this may practically work because a computer (and thus the Onefinity Controller) will not change its link-local address once it has automatically chosen one, except if it is already in use by another host on bootup (or until the next time Onefinity tells you to flash the entire system

). But by principle, this is not really a static address, since you have no guarantee that this IP address will stay.

This would only be the case if you use the static configuration example above or, if you have a DHCP server in your LAN, you configure the DHCP server in a way that it assigns a static address.

But I still find it surprising that connecting the Onefinity Controller to a Windows machine with the aim of automatically setting up a zeroconf configuration does neither allow to discover the address of the Onefinity Controller nor does it work by Name Service Discovery by addressing it with “onefinity.local”. Does this really only work on Linux and Macs?

So on my (linux) desktop computers, before I connect the Onefinity Controller, it it shows:

and after connecting the Onefinity Controller:

at least on the (linux) computers I use.

There seems to be a tool like “arp” on Windows too, but when I connect the Onefinity Controller to a Windows notebook and do “arp -a” on it, it just tells the local interfaces, but it seems it did not register the ARP probes sent by the Onefinity Controller, or at least it does not show them on the ARP table. Does some windows user know why?

As I mentioned before, I extremely rarely use Windows computers and don’t know why neither Name Service Discovery nor “arp -a” do work on Windows for discovering the Onefinity Controller.

EDIT: And if you look at the first and the 13th post of this thread, it seems it worked on windows xp! Why was it not reproducible on the higher windows versions computers Fred11 and I tried?

I tried that but it doesn’t work.
Maybe I entered something wrong.
I tried with spaces or not, no results.
Maybe the line break
I have to do it again, I don’t remember what the program is telling me.

I have a static configuration working here (with slightly other IP address). At which moment was there a problem?

Of course, as always with computers, any typo can cause a failure. Don’t forget the newline at the end of the file.

The whitespace indentation is not relevant, it’s only for clarity.

The activation of the new configuration goes with ifdown eth0 && ifup eth0, however this only works if eth0 is already up. You can check this with ifconfig, which shows the interfaces, eth0 should first be there with a 169.254.*.* address (link-local), and after activation of the static configuration, it should be there with the 192.168.1.1. address. If eth0 is not there before with ifconfig, it is ifup eth0 that starts the new configuration.

I just tested it with a windows notebook and the Onefinity Controller with the exact configuration as shown in the example above and it works:

Then I install the new static configuration as /etc/network/interfaces.d/eth0 :

Then I activate it: 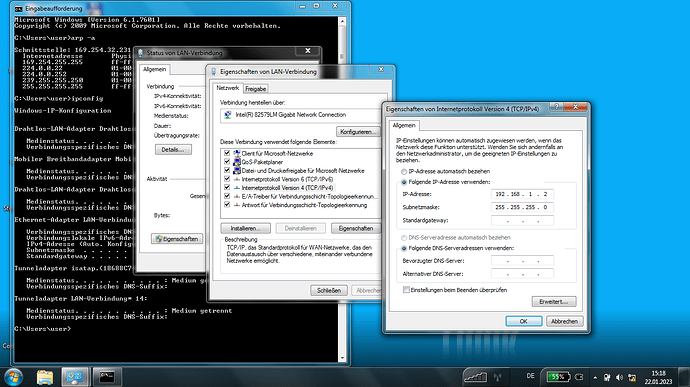 Take care to use http:// and NOT to use https:// because there is no secure web server installed on the Onefinity Controller.

Now I see the nice Onefinity Controller User Interface which asks me if I want to home the machine. 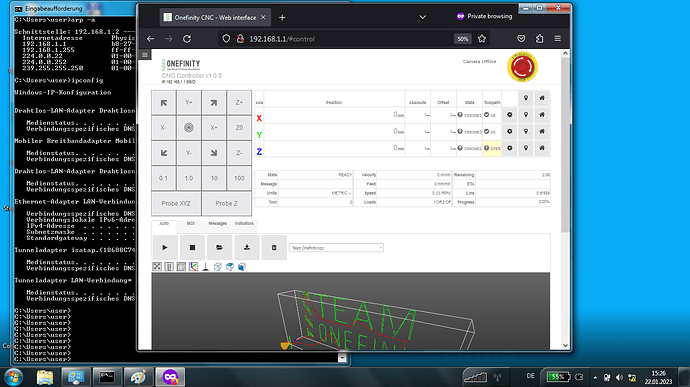 Final step would be to edit C:\Windows\System32\drivers\etc\hosts and to add an entry like this:

This would allow to enter http://onefinity in the web browser on the windows pc.

But I would really like to know why the “onefinity.local” addressing when using a zeroconf connection did work with your windows xp computer but did not work with the windows 7 or later computers.

Why does addressing the Onefinity Controller with the name ‘onefinity.local’ work with Linux and Apple computers, but not with many Windows computers?

Many of you read in Onefinity’s help document FAQ: How to directly connect your Onefinity CNC to a computer/laptop (no screen present) that you could simply connect the Onefinity Controller to a computer, notebook or tablet and address the Onefinity Controller by typing ‘http://onefinity.local’ into the address bar of your web browser. However, it has been frequently reported that this doesn’t work on some computers / operating systems, while addressing with the IP address still works.

As far as a little overview of the matter Name Service Discovery in conjunction with zeroconf shows me, Microsoft Windows Version<10 allows addressing with a hostname (like ‘onefinity.local’) through the LLMNR service (RFC 4795), while Apple and Linux use the mDNS service (RFC 6762) to implement this capability. While mDNS has been approved as a standard by the IETF, Microsoft’s LLMNR has not. That’s probably why Microsoft finally in 2022 planned to switch from LLMNR and NetBIOS to mDNS, but that obviously doesn’t apply to all the legacy windows machines.

But there is a solution.

The package that allows Name Service Discovery via mDNS on Apple computers is called Bonjour. This is the implementation which uses mDNS just like Avahi on Linux. The good thing is, Apple Bonjour can also be installed on Windows ← click here to download. By the way, @Matticustard already suggested this the other day.

I just installed it on the windoze computer and tested it, it works: 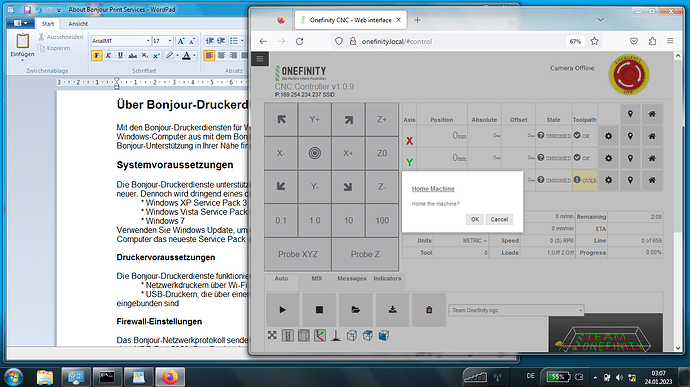 On the windows computer, the network connection is set to requesting IP address automatically.

PS: With the link above, you can download Bonjour for Windows 2.0.2. However there is a newer version 3.0, of which it is said:

Windows doesn’t have Zeroconf support out of the box, but a few popular applications slip it in for their own needs, including Skype, Apple’s iTunes and Adobe Photoshop CS3 or later. So you might not need to add anything at all!

The newest-and-shiniest version 3.0 is only available in the iTunes installer. So one option is to simply install iTunes, even if you don’t plan to use it.

Some users are understandably reluctant to install unneeded software. In that case, Bonjour 3 can still be installed with a little trick: download the iTunes installer but don’t run it. Using an archive utility like 7-Zip or WinRAR, you’ll discover there’s a separate Bonjour installer inside. Just extract and run that one piece, and you’re done!

Once installed, Zeroconf systems on the local network can then be accessed by name instead of numbers…in a web browser, for example, one might reach a Raspberry Pi hosting OctoPrint at http://octopi.local