Just wondering if the cable that is supplied with the Touch Probe can be replaced with a curly cable?

The current cable just seems to have a mind of its own and constantly gets tangled and I’m forever messing with it to get it into some form of orderly fashion.

If I was to purchase ‘Curly Cable’ what would be the requirements in terms of plugs and No. of wires inside the cable?

Only two wires are required. They represent a normally open circuit. When the bit touches the probe, the circuit is closed.

This is the cable I used with my probe. It has four wires (USB 2.0), but I only used two. I just chopped the ends off and spliced it into the existing probe cable. 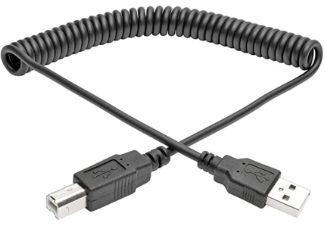 The banana plug connector acts like a spring, keeping it snug in the hole and keeping solid contact between the parts. I can think of a few reasons I would not use a 3.5mm audio connector.

Ultimately, I ended up removing the magnet section on mine as I have a grounded HY spindle which can close the circuit without the need for the magnet.

Does it matter which wire goes to which connector at the controller end or do they sort themselves out?

I believe best practice is to have the touch plate connected to controller +VDC, and the magnet to ground. Onefinity recently posted a photo labelling the probe pins (although title was for laser?). The top pin was ground and the bottom was +VDC output.

Does it matter which wire goes to which connector at the controller end or do they sort themselves out?

to use a touch probe means closing an electrical circuit by making a probe mounted in or on the milling motor (usually a bit in this case) and a probe plate move toward each other until they touch. If you use the Makita hand trim router, which is a Class II device, which means it is double insulated and does not require to be earthed, then it does not matter which pin of the probe input is wired to the magnet probe and which is wired to the touch plate. It was even reported that some touch probes were wired the other way around than some other specimen; it made no difference when using the double insulated hand trim router.

In fact the magnet probe is only required because the hand trim router is double insulated and not earthed. You need to attach one wire with a magnet to the trim router’s shaft because it is isolated, and the other to the touch plate, to finally have a circuit which can be closed at the moment your bit in the router touches the touch plate.

As soon as you replace the hand trim router by a spindle, which means an induction motor driven by a VFD, which obligatorily needs to be grounded in order to prevent motor bearing currents which can easily destroy your bearings if the spindle isn’t grounded correctly, you already have ground on all metal parts of the spindle, including the milling bit. Therefore you will only need one wire then, the one that leads to the touch plate (the function of the other wire is then already present through the grounding wires of the spindle, the VFD and the Onefinity controller). Note that the single wire to the touch plate must then obligatorily be connected to the PROBE_IN pin of J10 connector, which is the lower pin in the picture below (alternatively you can also connect the touch plate to pin 22 of the 25-pin I/O port). 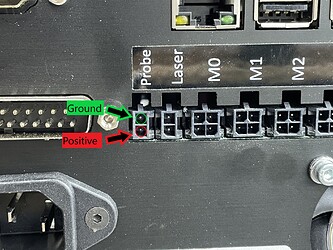 Thank you for the info about the trim router shaft being isolated. I have have had the same frustrations on the cable getting tangled all the time and have been thinking about the possibility of having the magnet portion connected all the time. With your explanation, it makes sense why it cannot be done with the trim router. Thanks for taking the time to explain. Learned something new today.