I ordered an Elite Woodworker in late November and I am setting up my shop space to install it when it gets here.

It looks like the layout of the Elite is a bit different from the original models. I am particularly interested in overall footprint, clearance for the controller/screen, and electrical routing. Right now I do not believe I have the information I need to set the space up for this machine.

When will the Elite series installation manuals be available to us?

I’ve been wondering the same thing, trying to get design specs so that I can finish the overall dimensions 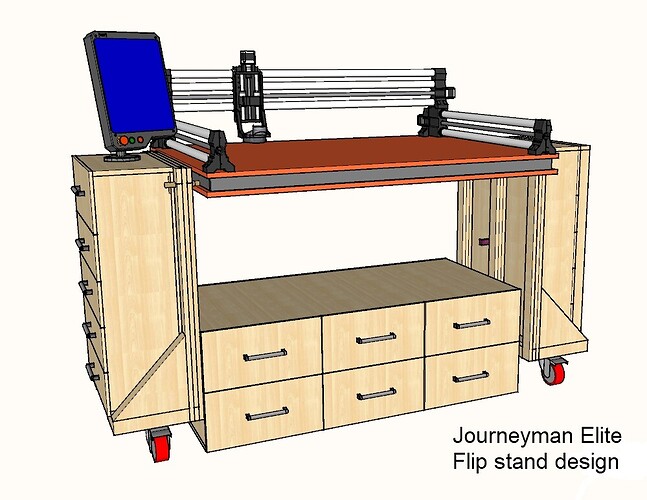 I built a similar one for my JM. You will want to rethink the lower drawers or you may end up with the table at an uncomfortable height when you tilt it horizontal.

Mine is about 43" off the floor (40" to the top of the torsion box & another 3ish for the QCW & waste board). The QCW isn’t really necessary but was a quick way to integrate waste board & t-tracks. Regardless, 40" by itself is pretty tall.

I only have a set of pretty short cubbies on the bottom as well. The two rows of drawers are going to force your pivot point fairly high off the ground.

I did a post of mine and discussed the dimensions I ended up with. I modified Fischer’s tilt-table to fit the JM. BTW, I also added an electric winch to rotate the table - it’s a beast to control the flip otherwise. I expect the Elite Foreman will be even harder to flip without power assist.

Yes, i have the Journeyman coming, i modeled an existing torsion top i already have on hand. I was concerned about the y axis drag chain dimensions
If in fact it has one? Also the control box dimensions, I’ve got the Masso covered.
I am going to modify this for a working height of 36", but was waiting on some further specs before building it out. I like the idea of getting that work space when it flips…thanks for the feedback

I was concerned about the y axis drag chain dimensions
If in fact it has one?

By routing the wiring that way I can rotate the table 360 degrees and use the other side as a nice big assembly or finishing table.

EDIT: as pointed out below, there is one on the Elite Foreman.

I was concerned about the y axis drag chain dimensions
If in fact it has one?

On Elite Journeyman, there is one, here you see the one on left Y: 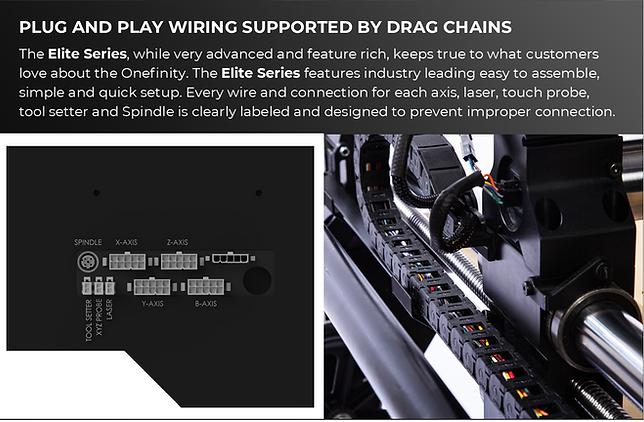 That’s the one, any insight on when the details of a footprint are going to be available

That’s the one, any insight on when the details of a footprint are going to be available

they said they still have a lot of documentation to make.

Here ← is the footprint of the Elite Foreman, the width dimension should be identical.

What I would ask myself (If I were interested in one of those machines) is if when you choose the 80 mm spindle option, whether you get a wider drag chain…

The ones you see on the pics are not wide enough for coolant hoses of water-cooled spindles. A full-blown drag chain with spindle cable and two coolant hoses is usually 50 mm wide.

That’s a good point, i ordered the 80mm spindle, and dragchains come in an array of sizes…so i guess I’ll wait patiently for details to emerge…or i could guess and just kick it out 6 inches

Still undecided on the spindle, i had a 2.2 kw that smoked before i even got it installed. It was bench testing and everything was working perfectly, until the VFD went up in smoke. I’m gun shy now on Chinese spindles.