Hey! I was leveling a cutting board and about 1/4 of the way into the first side I received a “failed to parse float” error. What is this and what should I do? The machine promptly stopped.

What software and Post Processor are you using, Chris?

Hey Chris did you ever find out what was causing that parse float error? I’m getting the same error!

Can you post your gcode and design files here so we can take a look?

I’ve seen this (or something similar) a couple of times. From what I can tell, the communication between the Raspberry Pi in the controller and the microcontroller that actually drives the stepper motors is getting corrupted.

The most common cause of this is EMI (electromagnetic interference). Brushed motors like the one on trim routers produce a lot of radio noise, due to the way they work. That noise can travel through the router’s power cord, which then acts like an antenna, making the problem worse.

This is also the reason that some people experience “blanking” on their screen. That same EMI interferes with the HDMI video signal between the Raspberry Pi and the screen.

To address both issues, I put the Makita router’s power cord in braided metal sleeving, which I grounded. Both the HDMI blanking and this occasional communications issue went away. Haven’t seen the problem in at least 6 months. This is the sleeving I used: https://smile.amazon.com/gp/product/B01BIBQ940

I recently switched from the Makita to a 2.2 kW Huanyang spindle and VFD about a month ago. Also haven’t seen either issue since then, as everything is well grounded to help deal with noise.

Here’s a picture of the sleeving installed on the router’s power cable. That crazy extra plug wire-nutted on is purely for the ground-line. The white and black are capped. 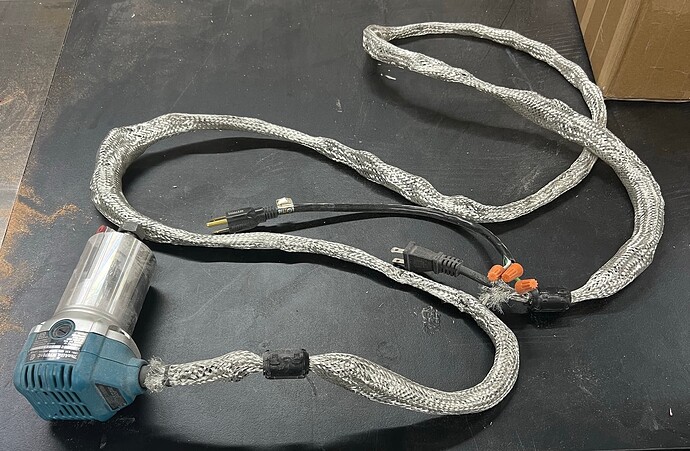 I think it’s good that again this shows that shielding the router cable makes sense and has an effect. But to be sincere, to implement it this way, -

-, and the second plug, well but it works.

Maybe it would have been simpler to buy and attach a few meters of LAPP ÖLFLEX® CLASSIC FD 810 CY or IGUS chainflex® .

What gives me stomach ache, is your use of Installation Terminals in a cable for a movable device, and then you take Wire nuts of all things, which are forbidden in many countries for obvious reasons and were replaced long ago by lever-actuated (overview lever-actuated), push-in or screw terminals. But first of all in a cable of a movable device, splicing connectors for fixed installations are not at all the right thing. They are not made for motion and even if your cable mostly is sort of fixed, you cannot exclude that it is moved. By the way for me it’s a little bit weird to see wire nuts, I haven’t seen one since decades.

What is a bit sad is that, caused by the router’s design, there is no simple option to ground the router’s housing by the cable. In order to be allowed to run on two-wire unearthed sockets, the tool is double-insulated, which means despite a part of housing is made of metal, it is not earthed.

By the way, this is the reason you need a magnet earth probe together with your touch probe (you don’t need the magnet probe anymore after switching to an (earthed) spindle).

The lack of earthing by design on this power tool leads to these safety warnings:

Note that the use of a GFCI should of course be standard in your workshop.

So what is a bit sad is that your shield must end before it reaches the part of the device that emits the sparks or does not join metal part of housing. But the device is designed this way. A way to obtain earthing on your router’s housing and more safety in general is of course grounding your CNC.

As I said before, I think it is good that you showed that shielding the cable of such a device has an effect and makes sense anyway.

Besides of your use of Installation Terminals which cannot be recommended, the fact that you used ferrite rings shows that furthermore you thought of everything