Now this is a very exciting announcement to me. Reasonably priced too, considering all things.

I have a small workshop and the 1F uses a lot of that floor space. Most other tools I have bought are portable so this ability to fold the CNC against a wall when not in use but roll it out when in use is something I will consider.
I’m sure some people who are considering a machinist due to shop limitations will now consider the larger woodworker…

Still given the size (it’s bigger than my Mafell Erika table saw, which is big), I’d be curious about how practical it is to fold/unfold. 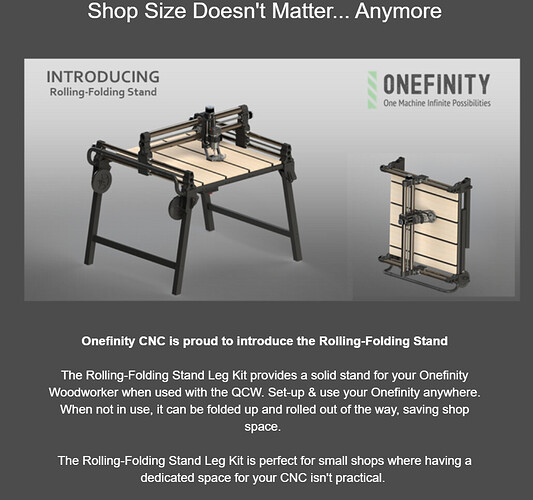 For more info please check out the Rolling-Folding Stand video:

Important Note: QCW Frame not included and is require for the Rolling-Folding Stand to work.

One just showed up on the Facebook group yesterday having arrived and been assembled.

also don’t assume new orders will match old orders for shipping dates. They have however run into issues with playing or anodizing or something. Not much they can do about that as it isn’t like there are a ton of metal coating specialists in each community.

Thanks for the post. I got a Journeyman coming in February and the stand and frame is a must for me but I’m waiting to order

Hey - something to keep in mind is that the rolling stand is for the Woodworker only according to 1Fs website.

“This stand is for the X-35 or X-50 Woodworker only. We do not have a version for the Journeyman at this time.”

I stand corrected. Are you able to snap/share a photo?

I wonder why they don’t advertise it for the Journeyman?

I was told it would not work with Journeyman when I spoke to support. Did something change?

I received a similar response from support that the current rolling cart would work with the Journeyman. Initially, they did say it would not. They must have done some more testing.

This response was received about 10 days ago:

“After our testing, we found that the Journeyman will safely attach and set up on the rolling folding stand. The only thing we found is that a second person would definitely be required to help lift it into position.”

When I asked Onefinity staff if the stand would work with the Journeyman, they informed me that it would work, but two people should be used due to the weight.

When I ordered it with my Journeyman I was told the opposite - that it was for the WW only and could not be used with the JM. Fortunately for you it seems their later advice was correct. Unfortunately for me what they told me was not so I ended up spending $400 and many days building my own somewhat bulkier tilting table.

This is the email that I received on July 2.

Thanks for your email.

It is true that we have not performed our own testing on using the rolling-folding stand with the Journeyman’s added weight and height. While the material specs do afford this, we have not tested ourselves, which is why we are not advising it to be used. Because of the added height and weight of the Journeyman, it is very difficult to maneuver. We will be conducting our own tests over the next few weeks and will have an update on this once completed.

If I am able to help you with anything else, please let me know.

Have a great upcoming weekend! 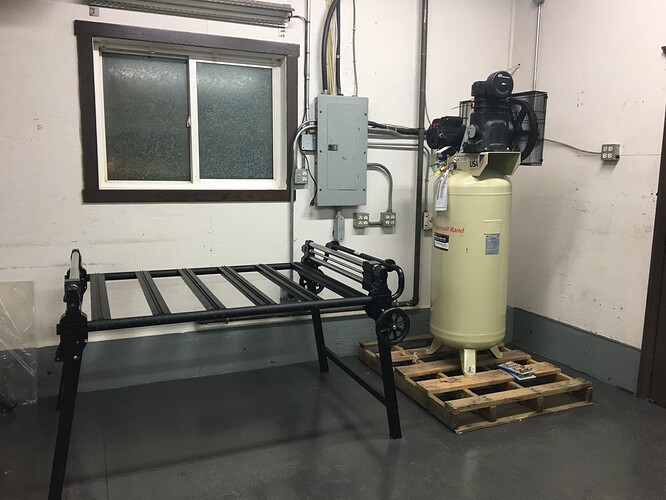 Hey, it looks like your wheels are on the outside but the instructions say they need to go on the inside. I’m having real trouble assembling them on the inside though. Did you try it both ways? Can you access the levers with them to the inside?

You are correct, the manual says to mount the wheels on the inside. In the Meyer’s Beta test YouTube video, they are mounted on the outside. Onefinity CNC Rolling/Folding Table // A Small Shops DREAM! - YouTube. I assembled mine the way it was in the video, I never tried it with them on the inside. The levers are accessible on the inside. I can take some pics tomorrow.

Thanks - don’t go to too much trouble. I have mine mostly assembled and I think I have overcome most of my difficulties except getting the handle lined up. I appreciate knowing it works well either way as I still may need to swap around.