I wanted to see what others are using for their webcam solutions as it pertains to resolution. I am running a 1080p camera and the image is beautiful but it seems that either the OF controller only displays a single frame or two every second.

Does anyone else have this issue?

@Mark is there a place to configure the webcam video settings? Am I doing something wrong?

This is the webcam I am using, it IS listed on the Raspberry PI compatible site as supporting 1080p .

Thanks for everyone’s feedback & support!

Since we’re currently using a raspberry pi 3, it’s an older piece of hardware. When the machine is running a file, using a usb controller and then a webcam there’s a lot to compute. A 1080p stream is more data to process than a 720 and will produce less frame rates. There’s no user end configuration that can be made at this point. We’ll look into more options at optimizing and selections that can be made over the coming months.

Just out of curiosity, can the Raspberry Pi be upgraded to the latest version by the user? The latest hardware is more capable and has a lot more ram. Also, would there be any real benefit to upgrade it, other than it potentially having a better video stream.

CAN you unplug the pi and install a newer one?, yes.
WILL the software work correctly?, no.

I also talked to the owner of Buildbotics about 2 months ago and the Rasperry Pi 4 WILL NOT WORK in the controller. The configuration of the board is different this there is no way to align it back up.

Complete newbie here, but what would be the benefit of using the controller to run a webcam over using something completely external, like a WiFi Wyze camera?

It seems if you want real-time video if the machine, this is the way to go. A dedicated wifi camera viewable on a phone or desktop, or a WiFi camera with a separate recording device. The OF camera display is awesome to have integrated into their control display but the bandwidth isn’t there for fast video. The controller is busy doing other things

What type or brand or recommended webcam? I am completely new to CNC and webcams. Also not sure I really need a webcam since the CNC is in my small shop so I can watch it as it cuts, but would be nice when I go in for lunch.

These seem to be a popular choice. I’m hoping to record video of the machine running from these as well

Could not be happier with the WYZE cameras, I think the non rotating would probably serve most people’s needs as the field of view is impressive. 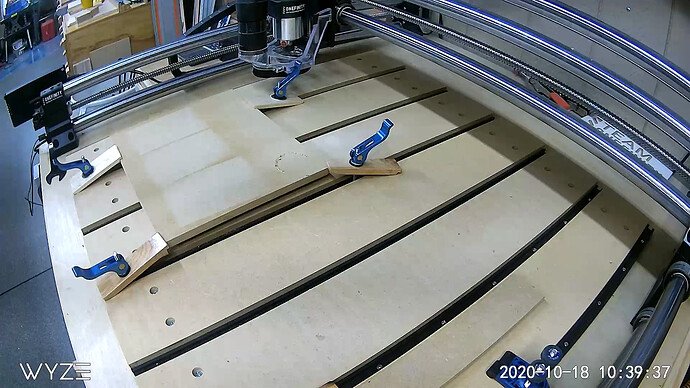 So. I am almost up and running. How did you connect the camera in the software?

I did not use the camera through the controller option as the framerate was not enough to support 1080p in anything that excited me. So I am using a WYZE $30 Camera and controlling it completely outside the OneFinity.

As a side note, the Wyze Cam V3 sitting on the front post behind the controller screen can see the entire working area. They are pretty slick and cheap. Just wish there was a way to view the feed in the browser but I load files using my phone anyways and it is always handy for me.

That was what I was trying to have happen.

Good to know. It was driving me nuts.

I did test a male to male usb cable to see if the Wyze cam would send the video out, but the port is only for daisy chaining the cams for power.

For anyone interested in using the Wyze as a standard webcam accessed through the Onefinity web interface, I have this working. Wyze has released special firmware that turns the camera into a standard webcam. Here is the process.

Things you will need:

Step 2: Extract demo.bin from the zip file and copy to the MicroSD card

Step 4: Wait a few minutes for firmware update to complete. Light will flash blue when done.

Step 6: Boot Onefinity controller. In my case, the camera was recognized automatically and the video feed showed up on the Onefinity UI.

Well, for a few minutes anyway. Then the video froze. I had read that the Raspberry Pi USB ports might not provide enough power to run the camera and that I might need to use the supplied MicroUSB cable and adapter for power in addition to the USB-A cable. But when I tried connecting the MicroUSB cable from the camera to my power strip, the Onefinity controller would hang on boot. I am not sure exactly what is causing this. Possibly because at that point, the Wyze camera was getting power from the wall plug and then sending power through the USB-A port to the Onefinity controller. That doesn’t really make sense but for whatever reason, I could not get it working consistently with either just the USB-A Cable or both cables. I actually tested this setup initially using the Raspberry Pi that I use to control my 3D printer (Octopi) and it worked fine there with just the USB-A cable.

Sorry if that is a bit confusing. The final configuration that worked for me was: powered USB hub connected to Onefinity controller and wall power, Wyze camera connected to USB hub via USB-A to USB-A cable. Hopefully this is helpful to some people. If you decide to try it and it doesn’t work, you can always re-flash the camera with the regular firmware and use it with the Wyze app.

@FrankP see my update to this post. I have the Wyze camera working as a webcam.

great write up robin! what kind of frame rate are you getting with the camera?

I’m not exactly sure how to tell. v4l2-ctl says 30 fps and since I did not do anything specific to configure the camera, I would guess it is using that value. When I configured the camera in Octopi, I used fps=10 since I read that higher frame rates might put too much load on the CPU. So far all I’ve done is wave my arm in front of the camera. Once I run my next carve I’ll get a better feel for how well it keeps up.