What the heck happened?

Hey guys, I ran into something peculiar last night. While cutting out a polygon on my 1F, all the sudden it went rogue on one of its last passes on this shape. I’m wondering what I’ve done that might have caused this? See below.

Some setup info:
-I’m using a drag chain for cables (including router power). The router power cable is shielded and grounded. The z and x axes were not grounded, the y axis cable was not close except near the controller.

It seems to me the right side y axis stopped momentarily but I can’t understand why this might have happened. Any suggestion on things to check? Thanks so much in advance!! 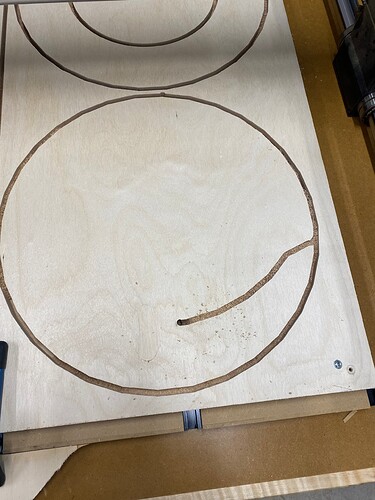 I would verify all of the connectors to the stepper motors are fully connected, verify the grub screws in the couplers between the ball screw and the stepper motor are tight. If all of that checks out ok then I’d suggest running it again ‘cutting air’ above the workpiece to see if anything odd happens, from the looks of the cut once it made the initial incorrect move it seems to have corrected back to the intended tool path. It’s also possible that you had some ESD from the dust collection that caused it to go wonky.

I agree that this looks like the X-axis continues normally (movement to the left), but Y-axes go their own way, like omitting some of the movement forward.

The connectors (not the controller) are the weak spot on this machine, especially combined with the lack of strain relief on this machine. That’s why I would first check what is described in this FAQ document under point 3). This is the most common cause of such problems.

But also the issue described under point 5) could be the cause: That one of the Y ball screws or both are blocked by wood dust/oil mix inside.

What can also temporarily block a Y ball screw, is if the machine is not accurately squared horizontally. See here for details.

But also finally, and only after having excluded the other points, you could check point 7).

Finally EMI can always lead to strange phenomenons. This is always difficult to track it down, which is why it is good practice to take good precautions here (correct grounding and bonding of all metal parts, use of shielded cables). As for the router, much of its EMI comes from the sparks on the carbon-brush commutators which you cannot prevent by a shielded cable.

have you been able to trace the error back to a cause? Visitors who find this thread would certainly like to know.