I am trying to inform myself on Mechatron spindles and would like to ask a few questions of the Mechatron users here or those that are familiar with them? I am looking for insights and advice.

Background: I have a Journeyman and I am considering a Mechatron HFS or HFS -AC series spindle for it. I bought the 80 mm mount with my OF JM. I live in the U.S. and if I were to end up with the Mechatron, I would likely buy a Hitachi VFD to drive it.

What are your questions? I know of at least one member who owns one - not yet up and running yet, and I had looked into them before purchasing my Jianken ATC spindle. There are several members who have the Hitachi or the Omron variant.

I know of at least one member who owns one

but when I joined the forum, I saw that Mechatron was already mentioned here and here

Alan you know that there are other german manufacturers. The advantage with Mechatron is that they offer their products to end consumers and show end user prices. They even have an ebay shop

And they have been very happy to answer all my questions, and in a timely manner. I would add that they also provide plug and play options for those not wanting to build their own systems.

I do not have a Mechatron spindle, but will answer questions as best I can.

What I have discovered thus far:

Cost is beginning to appear prohibitive but I am getting better definition. No clear answer as to where the spindle is actually made other than it is assembled in Germany from parts sourced there and elsewhere.

What are your questions? I know of at least one member who owns one - not yet up and running yet, and I had looked into them before purchasing my Jianken ATC spindle. There are several members who have the Hitachi or the Omron variant.

Tom, I would appreciate knowing what led you to purchasing a Jianken spindle?
Did you buy the JGD-80/2.2?
Where did you buy it and do you have it in hand yet?
Thx

I have built my CNC system around the 1F and Masso G3 controller, and knew from the beginning that I wanted to have an ATC spindle to maximize the functionality of both. I was somewhat leery of the HY VFD/spindle packages (although many people have great experiences others have not) so I was looking for alternative, potentially higher quality manufacturers. There are no ATC spindles as well at this very low price point.

I had looked at Mechatron, but their ATC spindle is currently out of my price range, however I do think this and their professional series are an all German product. I had read/watched several reviews of various Jianken spindles, all favourable, so started to explore their offerings. They had a 2.2KW 24K RPM ATC spindle that was affordable. I contacted Wafer at Jianken through email, and asked many questions over a long period of time. He(?) was always very quick to respond and answered every question. I could have bought it from him but decided to purchase it through their Alibaba store as this way I could avoid costs associated with extra banking fees. It arrived when expected and very well packaged (as shown on their website). I had several specific questions about the spindle after I received it, and all these questions were answered, again promptly and fully. He also sent me all needed documentation associated with electrical, pneumatics, etc., as well as the manual.

I have not yet tested the spindle as I am currently waiting for my VFD and 8020 extrusions/components to arrive. I plan to update the forums with all my progress, including my VFD and pneumatics enclosures that I am finishing now.

My goal is to learn from this spindle and the ATC process. If it does not meet my expectations, I would need to save for a different ATC spindle, but the next level of offerings are significantly more.

Thanks Tom for your detailed reply. I have gotten a quote from Wafer on a 2.2kw (JGD-80/2.2) and it is less than half the price of the Mechatron and can be shipped in a few days by UPS or FEDEX.

I am digging a bit deeper on it and am asking a few more questions. They claim the spindle comes with ceramic bearings from the USA which catches my attention.

I am hoping to get a torque curve on the Jianken. HY will not provide it.

That is great news. I hope your shipping experience was as seamless as mine, and that you enjoy your spindle. You will probably be up and running before me, so if time permits I would really appreciate any updates, testing, etc., you are willing to provide.

Tom, I am not sure that I will get the torque curve from Jianken. I asked for it and Wafer basicly ignored the question and sent me the manual. She is quite responsive so I sent her this Mechatron example so she has to acknowledge it.

I did the same with HY and they finally had to say they didn’t have it.

From the Mechatron curve you see that theirs will run at 3k rpm, although at a significant torque and power loss. BTW, the Mechatron quote I got included 6 meters of cable installed on the power plug so the cost is a bit better than I had previously thought. 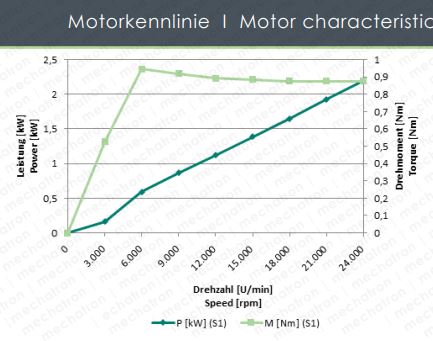 Among the things I liked about Mechatron were the available data sheets - Jianken are quite vague - and the cable and connector (probably not much for Mechatron but several hundreds for us for a good cable and connector). One thing I do not like about the Jianken is the cable/connection, but I knew this going in to it and will work around it best I can.

As for torque curves. I had originally wanted my machine to do everything, but soon realized that no spindle and machine set-up can. I opted for the ATC and high speed spindle feeling it will mill wood and aluminum well, albeit at higher RPM, which I will compensate for by experimenting with feeds and speeds (there are many who are doing this well - Winston Moy, etc…). I had considered the ability to do rigid tapping, but knew this spindle would not be able to, and for the times I would want to I could use it to drill the hole, and experiment with a threading bit. Rigid tapping would also require an encoder. Jianken makes many spindles for many applications, and they do have a series that would be suitable at lower RPM/higher torque with encoder. These are 4 pole and lower overall RPM, which in the end is not what I wanted. I would be curious what Mechatron says about their lowest continued use recommended Hz/RPM for this particular spindle. I have read that even though a RPM/Hz vs torque curve shows reasonable torque at low speed, does not mean it should be run with those settings, or for very long. Damage to the spindle, VFD, or both could be the result if not immediate but later seen with a shorter life. Keep in mind I have absolutely no real-life experience with any of this, so I read a lot, and try to keep an open and educated mind.
It is in my nature to learn and build, so I envision taking what I learn over time with my new CNC/spindle/VFD and using it to create another CNC. This one I would purpose build for lower RPM/higher torque, but it will also get a new VFD and spindle appropriate for the task.
Mechatron also has an advantage of being a one-stop-shop, in that they sell everything for a quick and easy plug-n-play set-up.
Please keep me updated on your progress, regardless of which direction you go.

For setting it up with the 1F, refer to this post: Hitachi VFD Connection

I got a quote on the Mechatron, but couldn’t justify that big of a price jump for hobbyist use. If I was running 8x5 (or longer) every week I might choose differently.

If you want to go down to 3K spindle speed, I’d recommend looking for a 4-pole spindle that is designed for metalworking - they are wired to keep their torque at lower speeds, but don’t have the same upper-speed range.

Thanks for the links. That’s just what I’m going to do. I ran an air-cooled spindle for years on a Shopbot Desktop and never had an issue. Don’t want to add the complications of water-cooled for my occasional use.

I saw couple of people recommending the Mechatron spindle, so I contacted their sales team. I got the following response for US customers:

Please be informed that probably you have to pay customs charges. To be sure, please contact your local customs authorities. They will certainly inform you about the arising expenses.

In order to facilitate the clearing formalities, your Social Security Number (SSN) and your phone number has to be handed over to UPS.

This may deter customers like myself. I am not sure if the above are true. Anyone in US sucesfully purchased Mechatron spindle?

I bought the Mechatron last week. I see your post was in February. I never got a message like the one you described, but I suggested to Mechatron that they should tell buyers about it.

Germany doesn’t charge their Value Added Tax (VAT) from out-of-country buyers. But they have no control over the duties (tariffs) that other countries charge when they import stuff. I should have known that, but I didn’t consider it. We all know the US uses such charges to discourage imports when they could ‘buy American’. The charges aren’t the same for all items, nor for all countries.

When my Mechatron spindle arrived in Louisville, KY (a UPS center) they called my phone (luckily Mechatron knew what it was). They couldn’t release the shipment until I gave them my “Tax ID Number” (social security number). I’m sure the IRS keeps track of who did and did not pay the tariff.

That got the shipment released for delivery, but UPS charged $266 at delivery. (They’ll take a check). Nobody gave me an itemized list, so I don’t know how much of the charge was the tariff, nor how much was a UPS fee, etc. It wasn’t a show-stopper, but it was an undesirable surprise. So I sent a note to Mechatron (with a lot less detail) suggesting that they warn buyers about US charges at Customs.

Mechatron shipped mine air freight via UPS and yes, I paid duty on it.

I received an email from UPS when it cleared customs with the amount of duty owed and a link to pay it by credit card. It was an easy transaction and the package was received very quickly with very good tracking during it’s trip.

The duty for the spindle and 6 meter prebulit power cable was $48.

BTW, they did not ask for my SS number.

In order to facilitate the clearing formalities, your Social Security Number (SSN) and your phone number has to be handed over to UPS.

They couldn’t release the shipment until I gave them my “Tax ID Number” (social security number).

welcome to the forum!