Proper Grounding; How have you grounded your frame?

So really, I am looking to see how others have grounded there systems, cause this is getting annoying. I don’t want to create any ground loops. But I also don’t want to avoid grounding something. My spindle cable is shielded, and will be grounded at the VFD side. So would the single ground on the spindle, that goes to the VFD, be sufficient to ground the entire machine?

This leads me to my next question, if I should be grounding the frame & the spindle ground is not sufficient. Is it safe to ground the X, Y, & Z separately, without crteating a ground loop, as well, can I solder all these grounds together to a single wire, that will then connect to the VFD’s ground?

I also have purchased some extended controller cables. These are also shielded, and I was thinking of throwing ring terminals on them, and grounding it to the controller via a screw and different nuts (the same way that the electronics inside the controller are grounded to the controller case). Essentially its a ground drain, would that be sufficient?

I am trying to do this as correct as possible.

You may want to put a small grounding bar in your VFD, similar to what i did. Check out CorvetteGuy’s (Vince) Youtube channel/Ebay store, I think I paid $15 and had it in a few days. I will post a pic in a pit of what it looks like…

PS. I am also struggling with weather/how to ground the frame completely, as I think some of the issue is that parts of the machine are isolated, and therefor may not need additional grounding.

I have grounded my machine on one of the legs, I used 1/4-20 bolts through the feet and I attached the ground wire on the underside with a nut. It’s worth noting that the conductivity through the bearings and blocks seems to induce some resistance so it is advisable to also ground your spindle as you have.

Kyle, as you obviously know, it is really important to ground the VFD and spindle to Earth. The Asian suppliers seem to let this slip far too often and ship spindles with power plugs with the ground not connected to the spindle. Not sure what spindle you have but that’s irrelevant since yours is grounded.

BTW, I assume you are using a 220V VFD/spindle arrangement.

Like you, I am worried about ground loops. So I personally keep my 110V devices on a separate circuit and they are separated physically from the Spindle/VFD’s Earth. So each respective circuit deals with its own grounding.

I haven’t experienced a need thus far to add any additional grounding to the machine’s carriage. I have assumed it is more important to keep the machine “noise” free.

I too will be looking at grounding. Did I read somewhere the touch pad wires might have to be reversed? or not?

Some users have reported when they ground their spindle and then attach the magnet for the touch probe it will complete the probe circuit and reversing the wires on the touch probe resolves the issue. Of greater concern IMO is that earth ground and the digital ground output of the controller seem to be bonded together somewhere that allows this to happen, these should be isolated and when their not it would be a direct path for EMI to the controller.

Only if it was fabricated incorrectly. There has been some incidence of that.

Kyle, I too have experienced the lack of HY grounding their spindles. Take it apart and add your own jumper to the spindle housing. When/if the spindle shorts to ground it is important to control the fault current giving it an easy path back to the VFD ground terminal. Purchase a small ground buss as you will have several other things to ground. The incoming ground, spindle ground, shields, and axis bonds all should be in a star configuration. Axis bonds should not be needed as we are only talking about the stepper drivers shorting through motors and that is less than 36 volts or your controller supply voltage.
However, think of the damage when the spindle shorts to ground. Personal protection aside, the fault current will find a path through the linear bearing and the controller destroying everything in its path.
Now that you have a dust collection system, ensure there is a path for static to discharge to earth as well. Grounding the flexible hose spring all the way back to the housing of the blower will ensure it does not go through the controller or you.
I have worked in the electrical industry for 30 years and now work in instrumentation/control in the oil fields. I have done troubleshooting most of my career and find if you design your system properly in the beginning, it eliminates a lot of money/headaches in the future.

I don’t have my rails grounded and see no reason to ground them. The black anodized aluminum parts would need to have the anodization removed to properly ground them. That includes where the tubes connect to them. The lead screw would also be difficult to ground. Going through the bearing is not the proper way to ground.

The grounded spindle will provide a ground bond to the rails and machine assembly as well.

Although not necessary having some path to ground via the metal chassis all be it poor (I measured about 25 ohms from the spindle mount through the gantry though the bearings to the foot) is better than none when it comes to ESD trying to find a path to ground, better a poor ground on the metal parts than ESD finding it’s way through the stepper motor wiring, probe block, controller etc IMO.

There are two topics getting intermingled when it comes to the discussion of grounding, one is for protecting personnel from contacting an energized part due to a “mains voltage” fault in the case of a spindle to protect the operator, grounding the chassis will help protect the controller from the EMI/RFI and ESD potentially generated.

The answer is any points with more then 3 ohms requires a new ground. On my Journeyman, this means that the X & Y get grounded through a single ground. The Z/Gantry gets grounded through the spindle.

Thanks for the update Kyle. Could you share your source for the answer?

I emailed corvetteguy50 on youtube, who sells the wires for Spindles and offers tons of support on the topic. He stated that it should be 3 ohms or less for robotics. NEC calls for 5 ohms or less in circuits.

Either way the ohms between the Z gantry and the X is 120 ohms. So a single ground from the Y axis should be sufficient ground for the X & Y, while the Z can be grounded through the spindle so long as the spindle (or router) is sufficiently grounded.

I’d still like to know the sources, like the specific NEC article being referenced. I am an EE and retired electrician and have never seen reference to these values. I get the idea someone can speak authoritatively on a subject but that doesn’t mean it’s correct information. It may fall in to the category of “a good idea” or “in my experience” but that doesn’t mean it’s required per code.

FWIW The Makita router (as well as most every router) will not have a ground pin on it’s cord, they are double insulated and the manufacturer/certification agency is asserting it is impossible to have a ground fault or condition where a person could be subject to hazardous voltage and current.

A spindle is a bit different as it has the potential for a ground fault internally where the outer metal components could become energized - this requires bonding to a ground but doesn’t necessitate bonding all of the Onefinity chassis components to ground as well. That’s along the lines of saying my metal bench vise needs to be bonded any time I use a corded drill to drill a hole in a piece of steel it’s holding.

So I found NEC calls for 25 ohms, and on Flukes website they state that others with specialty equipment call for 5 ohms. When googling it I found 5 ohms repeatedly, but none talk about robotics.

But again either way, if you are sitting on 120+ ohms that seems totally out reason for a ground. 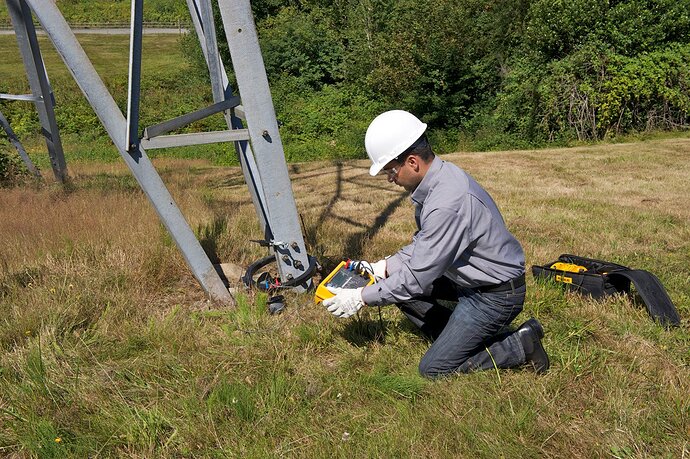 Why ground, why test?

Poor electrical grounding not only contributes to unnecessary downtime, it's dangerous and increases the risk of equipment failure and electric shock.

the 25 ohms for the NEC is in reference to a ground rod, there is no specification on impedance limit on a grounding conductor, since the grounding conductor is usually the same gauge as the grounded and ungrounded conductors the resistance and load carrying capabilities will be similar so it doesn’t need to be individually specified.

There is no requirement in the NEC or elsewhere for the chassis of the Onefinity to be grounded regardless of the measured resistance or impedance. It is an electrical system operating at less than 48 volts. You can ground it if you like to but there is no requirement to do so. I have mine grounded for the purposes of giving ESD a path to ground that doesn’t go through the controller.

To elaborate on the 5 ohm recommendation it really comes down to the overcurrent protection for a typical circuit, at 120v 5 ohms of resistance would draw 25 amps which is sufficient to trip a 15 or 20 amp circuit breaker. Too much more than 5 ohms and you could have a ground fault that doesn’t trip the over current protection (7 ohms at 120v would be 17 amps) . For reference 14awg wire has a resistance of about 3 ohms per 1000 feet, and is realistically the longest distance you can reasonably use 14awg wire due to voltage drop - different but related topic.

In the case of the Onefinity operating at 36v this would not occur, the controller electronics would give up and let the smoke out long before the circuit breaker would trip.

not that I want to participate in the 396403rd revision of this topic, but just as an example, a problem like shown on the picture below, which shows a short between stepper cable and CNC chassis due to an assembly fault, did only produce the correct Motor Error on Controller Display when chassis was grounded. Or when magnet of touchprobe was brought into contact with the rail. Without this, it remained undiscovered. 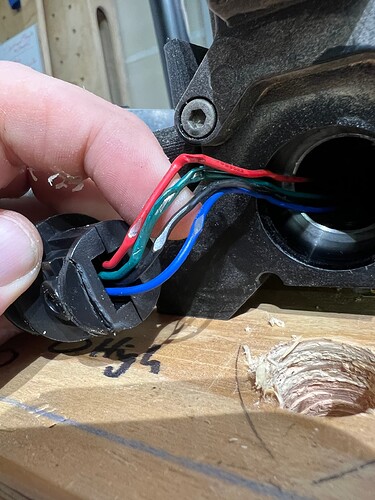 What if the entire CNC table is made out of wood? My spindle is internally grounded but I’m still getting lots of static buildup and my touchscreen flickers when the spindle gets near it. Sawdust wants to stick to the dustshoe/hose and linear rails… 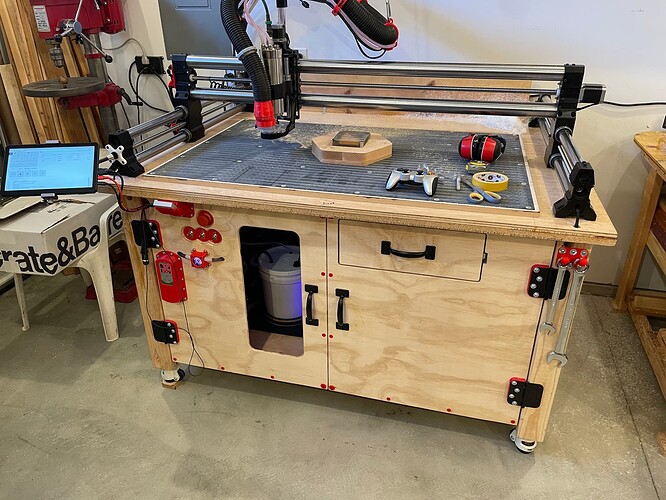 What if the entire CNC table is made out of wood? My spindle is internally grounded but I’m still getting lots of static buildup and my touchscreen flickers when the spindle gets near it. Sawdust wants to stick to the dustshoe/hose and linear rails…

did you ensure that your whole setup (rail’s feet, controller, VFD, dust collector) are electrically bonded and then grounded? If so, the electrostatic effects should not appear, even with a table made of wood.

PS: By the way, nice table with integrated technics and its red elements

I’ve since purchased a bus bar and some copper grounding strap. I mounted the bar inside the cabinet and connected it directly to the ground in my garage’s electrical panel. I then grounded the rear two Y-axis feet, controller enclosure, and the shielding going to my spindle (on the VFD side) using separate grounding straps (star). Before I mounted the bus bar/straps today, the shielding was connected to the same terminal as my spindle ground at the VFD. It’s now going straight to the bus bar.

So I guess I have three grounding unknowns:

I haven’t fired it up yet since I installed the bus bar. 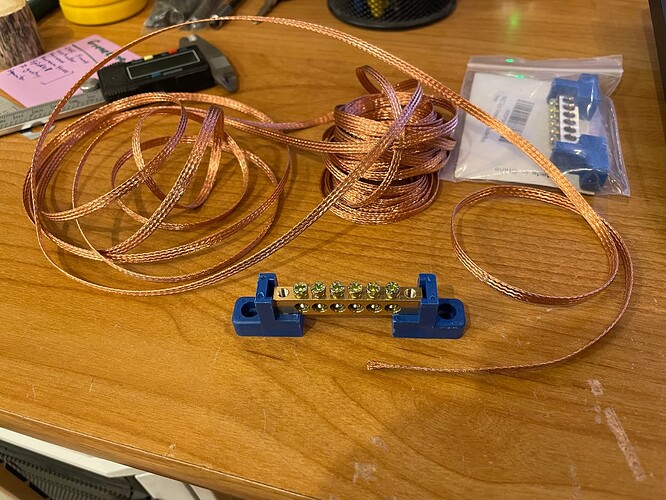 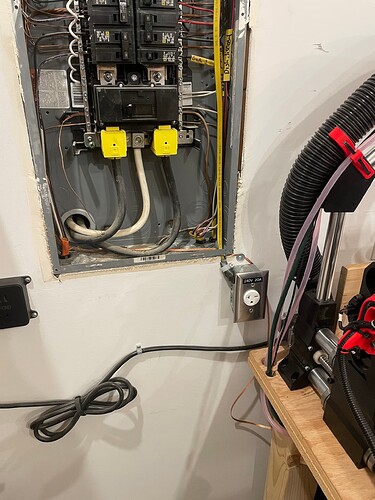 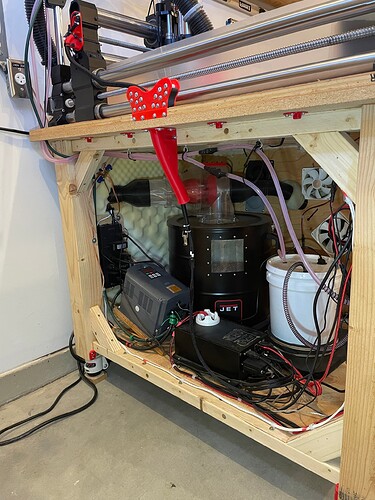 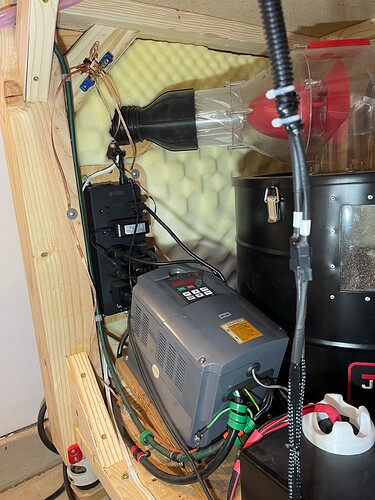 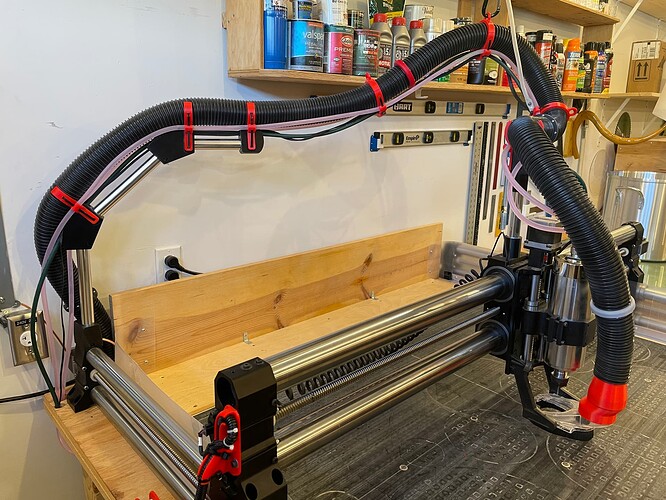